Efforts to increase and improve regulation of Wall Street have bogged down, according to , the former chairwoman of the Federal Deposit Insurance Corporation. On Wednesday, she will announce a new group, the Systemic Risk Council, that will monitor and encourage . 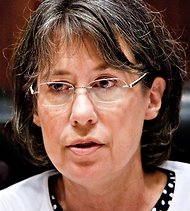 Sheila C. Bair, the former chairwoman of the F.D.I.C.

“The great challenge is to devise a system to identify risks that threaten market stability before they become a danger to the general public,” she said. “We need a more effective and efficient early-warning system to detect issues that jeopardize the functioning of U.S. financial markets before they disrupt credit flows to the real economy. And two of the most critical tasks are how to impose greater market discipline on excess risk-taking and effectively end the doctrine ‘too big to fail.’ ”

The Dodd-Frank act passed in 2010 provided for numerous steps, including the creation of an Office of Financial Research that was supposed to help the newly created Financial Stability Oversight Council in identifying threats to financial stability and deciding which financial firms were systemically important and how much additional regulation they should receive. That council is composed of all the major regulatory bodies, and so far it has accomplished little.

Some of what Dodd-Frank called for has been enacted, including so-called living wills for large banks and rules on how the business of such a firm would be wound down if it failed.

But much has not been done. The law included the , named for its creator, Paul A. Volcker, a former chairman of the Federal Reserve Board, that barred banks from engaging in proprietary trading but left it to regulators to adopt rules. Banks have harshly criticized proposals to enforce the Volcker Rule, and it is not clear what will happen. Efforts to reform the private mortgage securitization business have gone nowhere.

In many areas, Ms. Bair said, “nothing has been finalized. F.S.O.C. is M.I.A. O.F.R. is barely functional. The Volcker Rule is mired in controversy. Securitization reform is stalled. They haven’t even proposed new bank capital rules. The public is becoming cynical about whether the regulators can do anything right, which is undermining support for reforms.”

In an interview, she cited a report by Davis Polk, a major law firm, saying that regulators had so far missed two-thirds of the 221 deadlines for adopting regulations set forth in the law.

The new group, which expects to begin issuing reports quickly, will include a long list of former regulators and officials from both parties, including former Senators Bill Bradley, Democrat of New Jersey; Chuck Hagel, Republican of Nebraska; and Alan K. Simpson, Republican of Wyoming. It will also include Brooksley E. Born, a former chairwoman of the Commodity Futures Trading Commission, whose efforts to fight deregulation in the Clinton administration failed, and Paul H. O’Neill, the first Treasury secretary under George W. Bush.

Others include John S. Reed, the former head of Citicorp, and Hugh F. Johnston, the chief financial officer of Pepsico. Mr. Volcker is listed as a senior adviser. The organization is being formed by the Pew Charitable Trusts, where Ms. Bair now works, and the CFA Institute, an organization of financial analysts.

“Despite the magnitude of the financial crisis, prospects for major reform of regulatory systems are inadequate and vague,” said John D. Rogers, the president of the CFA Institute and a member of the new group. “This council will serve as an essential sounding board for systemic risk reforms focused on strong investor protection, and offer a critical voice to promote the enforcement of regulations, financial disclosure and transparency.”