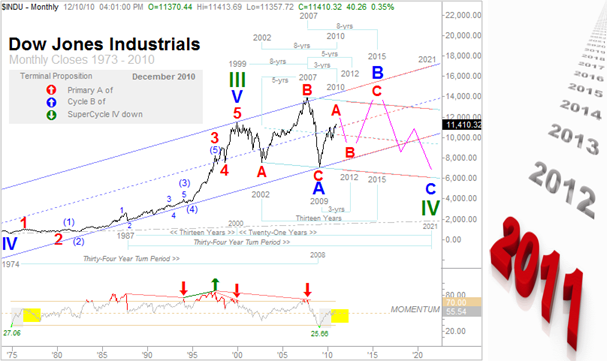 Elliott Wave Technology
Exactly 4-years ago we presented a year-end series of forecasts for the Dow Jones Industrial average.

A forecast or prediction is a message that is stated or declared, a communication (oral or written) setting forth particulars, it is a statement about the way things will happen in the future, often but not always based on experience or knowledge.

While there is much overlap between prediction and forecast, a prediction may be a statement of an expected outcome, while a forecast is more specific, and may cover a range of possible outcomes.

Within our forecast from 4-years ago, we presented 3 specific possible outcomes going forward for the Dow Jones Industrial average.

As it turned out, it was the 3rd proposition within our range of 2010 forecasts that appears to have come to fruition.
In it, we had labeled the top of Supercycle III at the 1999 crest. Doing so positioned the (then) all-time-high in 2007 as an expanded B wave at primary degree.
We noted severe oversold conditions in the lower momentum panel at the bear market low in 2009. We stated further that readings of such magnitude had not occurred since the last cycle degree low way back in 1974. We concluded that these two correlated extreme momentum conditions were rather suitable in identifying the 2009 low as a Cycle degree A-wave.

Four years ago, with the Dow trading at 11,400, our forecast proposed that the Dow was only part of the way through its larger bull market at Cycle degree.

The forecast called for an imminent primary degree B-wave decline into the 2012 period (which we got in late 2011), followed by another leg of the bull market within the larger Cycle wave B – which brings us right to where we are today.

Untouched from 4-years ago, we pulled this chart forecast from the archives earlier today. With minor amplitude adjustments for the fresh historic highs posted in 2014, the predictive qualities of the work remain on track.

Elliott Wave Technology
Prechter has been dogmatically wrong since 1995. He's been chasing Armageddeon ever since. http://www.elliottwavetechnology.com/2012/02/left-behind- chasing-armageddon.html#fragment-4 12/21/14