HEARD ON THE STREET: Zynga Shares in Facebook's Pain - WSJ.com

I still have yet to understand why anyone would pay real money for the virtual crap in FarmVille.

With Facebook's FB -8.90% stock plunging, Zynga ZNGA -4.09% suddenly finds itself in a socially awkward spot. It doesn't help that Facebook itself seems less bullish on the revenue potential for social-gaming companies.

In a late April securities filing, Facebook cited an estimate that global sales of so-called virtual goods—something Zynga relies on for the bulk of its revenue—would rise to $15 billion by 2014. That would imply an average annual growth rate of about 19%. Two weeks later, it cited a new estimate that the number would be $14 billion by 2016, halving the growth rate to 9%.

If the growth rate continues to slow, that would call into question Zynga's valuation. At $7.09, its shares trade 29% below their IPO price, yet Zynga still fetches a valuation of roughly 10 times 2012 earnings before interest, taxes, depreciation and amortization. Videogame maker Electronic Arts, EA -0.83% which trades at a five times multiple, is boosting revenue about 5% a year. As research analyst Arvind Bhatia of Sterne Agee points out, Zynga's premium valuation looks more questionable if growth continues to slow. 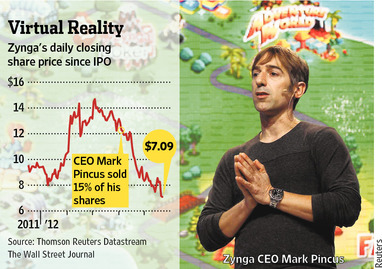 That may be happening. For starters, top Zynga games like "CityVille" and "FarmVille" are declining quickly. According to AppData, the number of daily average users of those two games has fallen 54% and 38%, respectively, since October. Another game, "Empires and Allies," has seen daily users fall 70%. Some games like "Words With Friends" and Zynga poker continue to be popular. But the company's new games aren't catching on like old ones.

Revenue continues to rise, perhaps because the company is clever at using data analysis to sell more virtual goods to the roughly 2% of players who actually pay for them. The other 98% play Zynga's games for free. But even the most addicted players may fall away over time as games diminish in popularity.

To help plug holes in his development pipeline, CEO Mark Pincus made a questionable decision to spend $183 million to buy OMGPOP, the maker of a Pictionary-like mobile game called "Draw Something." That game had exploded in popularity in a matter of weeks, and Mr. Pincus bought it at the top. In early April, it peaked with more than 14 million daily average users. It has since fallen to nine million. It is also worth noting that Zynga, like Facebook, is growing quickly on mobile devices, where revenue is harder to generate.

Shareholders also may have been put off by unanticipated selling of shares by insiders. IPO underwriters Morgan Stanley MS +0.91% and Goldman Sachs GS +1.06% modified a six-month lockup period that was supposed to prevent insider selling before May 28. Mr. Pincus, for instance, sold 15% of his shares on April 3 at $12.00 a share—far above today's level.

The social-gaming company generates substantially all of its revenue on Facebook's platform, so some may have played Zynga's shares as a Facebook proxy before it went public. Now that it has, and its shares have tumbled, Zynga's own warts are more clearly visible.

Write to Rolfe Winkler at rolfe.winkler@wsj.com

A version of this article appeared May 22, 2012, on page C12 in the U.S. edition of The Wall Street Journal, with the headline: Zynga Shares in Facebook's Pain.