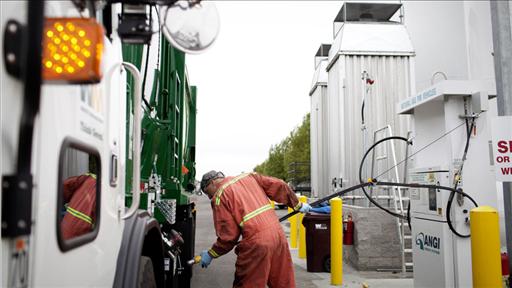 Waste Management devised a strategy to save money on diesel-fuel costs: it is buying trucks that will run on cheaper natural gas. Leslie Eaton has details on The News Hub. Photo: Alison Yin for the Wall Street Journal.

In fact, the company says 80% of the trucks it purchases during the next five years will be fueled by natural gas. Though the vehicles cost about $30,000 more than conventional diesel models, each will save $27,000-a-year or more in fuel, says Eric Woods, head of fleet logistics for Waste Management. By 2017, the company expects to burn more natural gas than diesel.

"The economics favoring natural gas are overwhelming," says Scott Perry, a vice president at Ryder Systems Inc., R +0.28% one of the nation's largest truck-leasing companies and a transporter for the grocery, automotive, electronics and retail industries.

The shale gas revolution, which cut the price of natural gas by about 45% over the past year, already has triggered a shift by the utility industry to natural gas from coal. Vast amounts of natural gas in shale rock formations have been unlocked by improved drilling techniques, making the fuel cheap and plentiful across the U.S.

Darrold Withrow, 41, is a certified fueler and mechanic at Waste Management, and he fills up a truck with liquefied natural gas in Oakland, Calif.

Now the shale-gas boom is rippling through transportation. Never before has the price gap between natural gas and diesel been so large, suddenly making natural-gas-powered trucks an alluring option for company fleets, rather than an impractical idea pushed mainly by natural-gas boosters like T. Boone Pickens, the Texas oilman. Railroad operators also are being affected as coal shipments decline.

Many fleet operators, particularly long-haul truckers, remain concerned about a scarcity of refueling stations. Other challenges include the bulky tanks for compressed gas and the hazards of handling liquefied gas. In the past, the volatility of natural-gas prices also hampered wider use.

But today, truck manufacturers are embracing natural gas for everything from bi-fuel pickup trucks like the Chevy Silverado HD to eighteen-wheelers that can burn natural gas either compressed, called CNG, or super-chilled, called LNG. Navistar International Corp., NAV -0.31% Cummins Inc. CMI -1.75% and General Motors Co. GM -0.41% all are courting the market with new natural-gas powered trucks or engines.

Navistar's goal is to "expand to a full range of products using natural gas in the next 18 months," says Eric Tech, president of Navistar's engine business. This year, the Illinois company is introducing delivery trucks burning natural gas. Next year, it is adding long-haul trucks with its biggest engines.

Mr. Tech says in a couple of years, one in three Navistar trucks sold will burn natural gas. "This is not a subsidy-driven market," Mr. Tech says. "It's developing on its own because the economics are compelling."

Ryder Systems began renting out natural gas trucks in California last yea. The response has been so strong Ryder is expanding the program to Michigan and Arizona. And it is introducing them in truck clusters it operates for big box retailers like Staples Inc. SPLS -1.21% and manufacturers including carpet-maker Mohawk Industries Inc. MHK -0.61%

Refueling a Waste Management truck in Oakland, Calif., with LNG.

Although the U.S. has loads of natural gas, adoption of natural gas vehicles has been spotty. Less than 0.1% of vehicles on American roads burn the fuel today and the percentage sagged slightly from 2005 to 2010, when federal policies encouraging their use waned. The number began edging up last year, lifted by market forces.

Many people are trying to figure out whether natural gas really has legs as a transportation fuel. Greg Burns, chairman and chief executive of PLS Logistics Services Inc. in Pittsburgh decided this year to ask 100 trucking company executives. The result: eight in 10 respondents said natural gas in its densest form, as LNG, has potential for highway use. Nearly a third said they were actively researching it for their own companies. But 54% said current infrastructure is inadequate and 23% worried about the higher cost of the trucks.

Mr. Burns' conclusion: "If you have a long-enough time frame, it's a pretty bullish picture."

Some truckers soon will have the ability to hedge their bets. That is because the Environmental Protection Agency recently approved retrofit technology for big rigs that lets them burn LNG and diesel.Kathryn Clay, executive director of the Drive Natural Gas initiative of the American Gas Association, says "the new technology is really game changing because the trucker can run on either fuel, eliminating refueling anxiety."

Converting even a modest number of these trucks, which often get 5 to 8 miles a gallon, to natural gas could save significant amounts of money. Tailpipe emissions also would drop, since natural gas burns cleaner than diesel or gasoline.

If large numbers of fleet operators decided to embrace natural gas, it could rev up truck manufacturing, which slowed dramatically during the recession. North American heavy duty truck sales peaked in 2006 with 360,000 units, just ahead of tighter emission standards, and plunged to 110,000 units in 2009.

Noel Perry, principal at Transport Fundamentals Inc., a trucking research company in Lebanon, Penn., says one disadvantage of natural gas is that it isn't as dense as diesel. CNG is only 25% as dense and LNG is 60% as dense. That means trucks need more tanks or bigger tanks to go as far, or they must refuel more often. That's not a big deal for city buses or delivery trucks that go back to home base each night, where they can refuel. But it's a problem for trucks that drive unpredictable routes or venture out into the hinterland.

Ann Duignan, managing director at J.P. Morgan Equity Research, says "there's huge excitement" about natural gas but infrastructure immaturity will depress truck sales. She expects fastest adoption among fleets that can run on CNG and return home each night but is skeptical about long-haul trucking. "It will be slow, steady, one-fleet-at-a-time type growth," she says.

Write to Rebecca Smith at rebecca.smith@wsj.com

A version of this article appeared May 24, 2012, on page B1 in the U.S. edition of The Wall Street Journal, with the headline: Will Truckers Ditch Diesel?.