Anyone with a Twitter feed knows that a lot of correlations are being made this year with the weather. The bottom panel of the mashup shows the latest housing start data in the midwestern U.S. I noticed by looking at a 24 year chart (top panel inset) of U.S. mortgage applications that since the Pit of Gloom in 2009, mortgage demand has dropped even more across the U.S. into a 5 year well defined narrow range similar to but more extended than the mid 1990's. Yes it's cold out there but as I have highlighted on the lower panel midwest chart, the winter of 2012 saw a spike in starts as dramatic as the current slump and according to a USA Today news item in December 2012 "...parts of 17 states are (were) under winter weather advisories as far west as Washington state and as far east as Maine." At the time of the news, 7 people had already died from weather related events, thousands of flights had been cancelled and tens of thousands were without power. Housing starts peaked that winter. More at www.chpc.biz 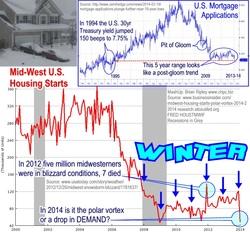 Levrage
The worst region for housing starts was the West, which not only didn't have snow but really hasn't had much precip at all, sadly 2/20/14
...