Did you know that to capture almost all return of the market since 1994, one need only be in the market 24 days a year!

"For many years, economists have struggled to explain the “equity premium puzzle” — the fact that the average return on stocks is larger than what would be expected to compensate for their riskiness. In this post, which draws on our recent New York Fed staff report, we deepen the puzzle further. We show that since 1994, more than 80 percent of the equity premium on U.S. stocks has been earned over the twenty-four hours preceding scheduled Federal Open Market Committee (FOMC) announcements (which occur only eight times a year)—a phenomenon we call the pre-FOMC announcement “drift.”
We don’t find analogous drifts ahead of other macroeconomic news releases, such as the employment report, GDP and initial claims, among many others. The effect is therefore restricted to FOMC, rather than other macroeconomic, announcements." 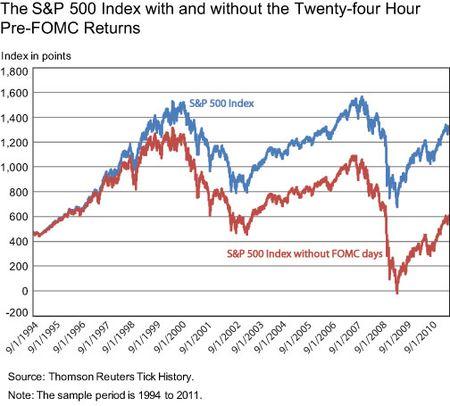