Number of the Week: Half of U.S. Lives in Household Getting Benefi...

49.1%: Percent of the population that lives in a household where at least one member received some type of government benefit in the first quarter of 2011.

Cutting government spending is no easy task, and it’s made more complicated by recent Census Bureau data showing that nearly half of the people in the U.S. live in a household that receives at least one government benefit, and many likely received more than one. 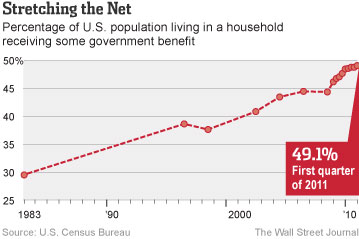 The increase in recent years is likely due in large part to the lingering effects of the recession. As of early 2011, 15% of people lived in a household that received food stamps, 26% had someone enrolled in Medicaid and 2% had a member receiving unemployment benefits. Families doubling up to save money or pool expenses also is likely leading to more multigenerational households. But even without the effects of the recession, there would be a larger reliance on government.

The Census data show that 16% of the population lives in a household where at least one member receives Social Security and 15% receive or live with someone who gets Medicare. There is likely a lot of overlap, since Social Security and Medicare tend to go hand in hand, but those percentages also are likely to increase as the Baby Boom generation ages.

With increased government spending comes the need to pay for it, and if taxes aren’t going to increase that means deficits. Nearly three-quarters of Americans blame the U.S. budget deficit on spending too much money on federal programs, according to a Gallup poll last year, but when the conversation turns to which programs to cut, the majorities are harder to find. For example, 56% of respondents oppose making significant changes to Social Security or Medicare.

The more people who receive benefits, the harder it’s going to be to make cuts, and it’s never popular to raise taxes. In some respects that argues for letting a combination of tax increases and spending cuts that is set to automatically hit in 2013 take effect. There’s just one problem: the Congressional Budget Office says it would sink the economy into recession.

Letting the 2013 provisions come into force would be like dealing with a weight problem by cutting off your right arm. It may not be popular, but a long-term, well-planned diet is the only solution.