Included in my chart mashup are the U.S. and Canadian inflation rates and a long term chart of the CRB CCI Commodities Index which has been dropping since 2011 and down well over 20%. If it retests the March 2009 Pit of Gloom, it will drop another 20-25%.

Dropping commodity prices are an indication of weak aggregate demand for stuff which is what most countries try to export if they don't have the know how to export value added services.

In this global environment of surplus labour, software is going to outperform hardware; ie: brains over brawn. More charts at www.chpc.biz 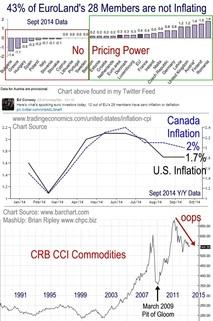