As I expect crude oil to collapse again but in some kind of a long term bottoming pattern, then, looking years ahead a BIG bull market!
I see gartman with his "crude oil below $55 for years" blabla... and crude rebounding immediatly

Then, same process for s&p:
As I expect a sharp and RAPID decline before the bull market continues for years.
gartman comes with his blabla on s&p far OTM puts and markets rebounding immediatly

So I'm wondering if the strategy is:
He and his superiors had crude to sell so as people do the opposite of gartman there were more short term buyers thx to him.
Then oil goes down and people start to think he could be right so they create inside themselves a bearish anchor/bias below $55 (so gartman and others can buy more below, knowing that longer term it's going way higher)

And for s&p he choosed the moment where there was the biggest probability of a short squeeze (even me, the big bear, was capable of anticipating it and covered my shorts belo 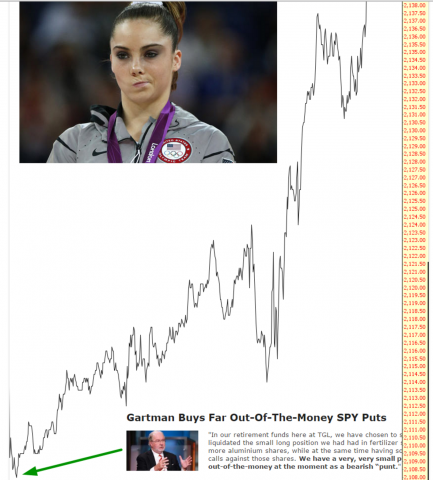 Silver Singularity
(even me, the big bear, was capable of anticipating it and covered my shorts below 2125, see post 1 sept15) to blabla about far OTM puts because that's exactly what they do NOT want people to do because stocks are gonna crash very rapidly and this is exactly what they are doing (buying otm puts to gain maximum amount) but the fact that he says that make people think a crash is NEVER gonna happen SOON if gartman said he bought far OTM puts.

PS: And after that if my anticipations of markets realize he can gain credibility thx to stocks but when oil goes above $55 enough time would have passed and few would notice or remember 9/15/16
...