Briefly recapping last week, anticipated "falling knifes" setups did not play out themselves despite some congestion at anticipated levels CAC40, ALSI40 and DOW made the new lows, keeping me busy cutting loses in a CAC40 setup that i took. FX pair GBP/JPY plummeted north as anticipated shy about 26 pips to anticipated BAT pattern completion. Despite missing that winner having the explicit rules of the trading plan let me handle these kind of situations in much better manner with less emotions and more of the cool head, which is very important while keeping "the state" that helps to identify best setups in the future.

Looking ahead for the week on the equity indices side of my watch list there are mixed sentiments and signals providing opportunities for both bulls and bears to take advantage of. French CAC40 index briefly tested the low of the last 3 months at the end of last week.There is high likelihood that the area around 3341 will be tested next week again. Despite this market curve being below 50 and 200 MA's both pointing slightly south, would not be surprised to see much more buying at those levels. 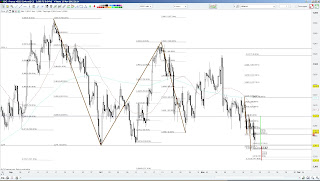 Very similar setup is shaping up on South African ALSI 40 market. What makes it a bit more attractive than earlier one is the fact that this market is still in a sideways mode and the long entry has more ground having BAT pattern already completed last week around 32540's. Having the downside tested again would present appealing case for long entry. 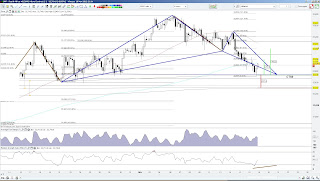 Both earlier setups are highly correlated and personally will be taking only one preventing too much of exposure in case of the downside. Will complete review of equity indices part of my watch list with setup on DOW. After breaking recent structure support to the downside the market curve seem to be coming back to he 12736's area that served as support prior to be broken. Shorting that area is a good opportunity to get involved into this very much bearish market and ride the waive of the downtrend. Looking at the FX side of my watch list two pairs will be watching closer next week . EUR/USD is shaping Gartleys pattern which if completed will present very appealing shorting opportunity at around 1.283's area that also served as significant pivot point in the past. At the moment it is in quite early stages of CD leg completion, so ideally this harmonic move should complete in the middle of the next week. 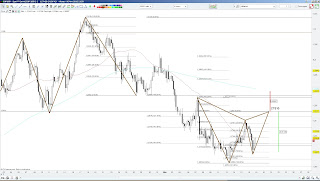 Finally GBP/JPY pair has very much channeling it's way in a recent weeks. As it stands now it is very close to 129.5's area which is significant point of resistance ceiling recently. Despite having relatively low entry score due to the fact that there is not much fib confluence there the risk/reward to the first target is almost 1/3 that makes it very appealing to get involved with. Will be adjusting the size of the position to make sure that ATR and chosen stop is in sync with maximum risk amount that can be allocated to this opportunity. 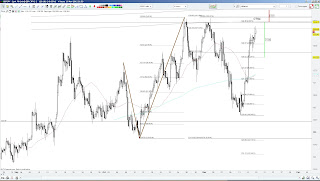 Have a good one traders!