Being predominantly pattern trader current market conditions are keeping me busy in multiple markets from watch list. To recap the last week setups i had immediate loser on ALSI40 trend continuation setup as well as two fills on advanced patterns that look more promising as it stands for now. French CAC40 completed Cypher was very close to stopping me out, however initial impulse from 3710 was never broken before the movement shifted to the downside. That kept me in that trade despite initial pain that had to be taken on board when it looked like the curve will continue to the upside. Initial targets had to be readjusted and target 1 was hit by the end of the week as well as getting very close to target 2. BAT pattern on EUR/USD seemed to be fading away before fairly dramatic run towards 1.3326's area. From there were two initial bounces forming bullish divergence, not much to get excited as the moment it terms of return, however the discipline while waiting for setup to be completed paid off when it looked opposite.

Next week is setting up to be busy one, just looking at CAC40 4hrs chart there are at least 3 pattern available, one that already completed last week and two emerging ones. The most relevant is bullish Cypher that should complete at quite significant 3620's area if looking at the daily chart. Will be looking to buy this area and run two opposite positions on this market. 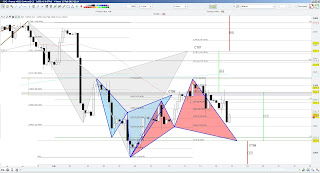 South African Alsi40 did not bring much joy recently as it was constantly moving upwards in quite erratic fashion making it quite hard to spot any profitable setup. Next week looks more promising as there are two potential pattern shaping up, namely  bullish BAT and bearish Cypher. As the market is is heavy uptrend the first one has more weight in my book, however both of them are valid setups to be taken on board. 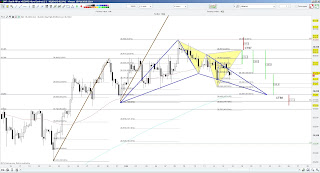 On FX side USD/JPY pair added recently to my watchlist has potential multiple setups on both bearish and bullish sides. We are very close to bearish Cypher pattern completion on 4 hour chart at 93.98's area as well as potential bullish Shark pattern emerging. Bearish setups should be considered with caution as this market is in heavy uptrend for quite some time therefore trying to touch the ceiling might not be good idea for everyone. 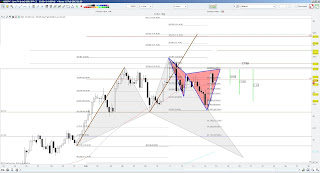 The last one on my radar for the week is Gold (XAUUSD). There was significant breakout to the downside last week. If the market will get back to 1626's area it may be good place to get involved in short position. 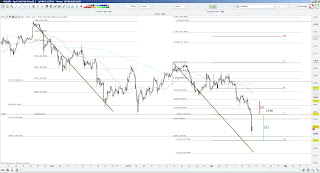 That will sum up this week's stub, with so many setups on a radar it is crucial not to get overwhelmed and stay focused. Have a good one traders!