BANKSTERS R US « The Burning Platform This Is What It Feels Like To Have Your Life Savings Confiscated By The Global EliteBy Michael, on March 29th, 2013

What would you do if you woke up one day and discovered that the banksters had “legally” stolen about 80 percent of your life savings? Most people seem to assume that most of the depositors that are getting ripped off in Cyprus are “Russian oligarchs” or “wealthy European tycoons”, but the truth is that they are only just part of the story. As you will see below, there are small businesses and aging retirees that have been absolutely devastated by the wealth confiscation that has taken place in Cyprus. Many businesses can no longer meet their payrolls or pay their bills because their funds have been frozen, and many retirees have seen retirement plans that they have been working toward for decades absolutely destroyed in a matter of days.

Sometimes it can be hard to identify with events that are happening on the other side of the globe, but I want you to try to put yourself into their shoes for a few minutes. How would you feel if something like this happened to you?

For example, just consider the case of one 65-year-old retiree that has had his life savings totally wiped out by the “wealth tax” in Cyprus. His very sad story was recently featured by the Sydney Morning Herald…

John now lives in the picturesque fishing village of Liopetri on Cyprus’ south coast. But for 35 years he lived at Bondi Junction and worked days, nights and weekends in Sydney markets selling jewellery and imitation jewellery.

He had left Cyprus in the early 1970s at the height of its war with Turkey, taking his wife and young children to safety in Australia. He built a life from nothing and, gradually, a substantial nest egg. He retired to Cyprus in 2007 with about $1 million, his life savings.

He planned to spend it on his grandchildren – some of whom live in Cyprus – putting them through university and setting them up. There would be medical bills; he has a heart condition. The interest was paying for a comfortable retirement, and trips back to Australia. He also toyed with the idea of buying a boat.

He wanted to leave any big purchases a few years, to be sure this was where he would spend his retirement. There was no hurry. But now it is all gone.

”I went to sleep Friday as a rich man. I woke up a poor man.”

How would you feel if you suddenly lost almost everything that you have been working for your entire life?

And many small and mid-size businesses have been ruined by the bank account confiscation that has taken place in Cyprus.

The following is a bank account statement that was originally posted on a Bitcoin forum that has gone absolutely viral all over the Internet. One medium size IT business has lost a staggering amount of money because of the “bail-in” that is happening in Cyprus… 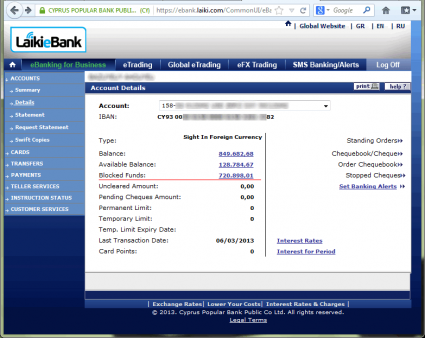 Over 700k of expropriated money will be used to repay country’s debt. Probably we will get back about 20% of this amount in 6-7 years.

I’m not Russian oligarch, but just European medium size IT business. Thousands of other companies around Cyprus have the same situation.

The business is definitely ruined, all Cypriot workers to be fired.We are moving to small Caribbean country where authorities have more respect to people’s assets. Also we are thinking about using Bitcoin to pay wages and for payments between our partners.

And of course the truth is that those that have had their deposits frozen will be very fortunate to ever see any of that money ever again.

Sadly, the truth is that the politicians will lie to you all the way up until the very day that they confiscate your money.

You can believe our “leaders” when they swear that nothing like this will ever happen in the United States, in Canada or in other European nations if you want.

But I don’t believe them.

In fact, as an outstanding article by Ellen Brown recently detailed, the concept of a “bail-in” for “systemically important financial institutions” has been in the works for a long time…

Confiscating the customer deposits in Cyprus banks, it seems, was not a one-off, desperate idea of a few Eurozone “troika” officials scrambling to salvage their balance sheets. A joint paper by the US Federal Deposit Insurance Corporation and the Bank of England dated December 10, 2012, shows that these plans have been long in the making; that they originated with the G20 Financial Stability Board in Basel, Switzerland (discussed earlier here); and that the result will be to deliver clear title to the banks of depositor funds.

If you do not believe that what just happened in Cyprus could happen in the United States, you need to read the rest of her article. The following is an extended excerpt from that article…

Although few depositors realize it, legally the bank owns the depositor’s funds as soon as they are put in the bank. Our money becomes the bank’s, and we become unsecured creditors holding IOUs or promises to pay. (See here and here.) But until now the bank has been obligated to pay the money back on demand in the form of cash. Under the FDIC-BOE plan, our IOUs will be converted into “bank equity.” The bank will get the money and we will get stock in the bank. With any luck we may be able to sell the stock to someone else, but when and at what price? Most people keep a deposit account so they can have ready cash to pay the bills.

The 15-page FDIC-BOE document is called “Resolving Globally Active, Systemically Important, Financial Institutions.” It begins by explaining that the 2008 banking crisis has made it clear that some other way besides taxpayer bailouts is needed to maintain “financial stability.” Evidently anticipating that the next financial collapse will be on a grander scale than either the taxpayers or Congress is willing to underwrite, the authors state:

An efficient path for returning the sound operations of the G-SIFI to the private sector would be provided by exchanging or converting a sufficient amount of the unsecured debt from the original creditors of the failed company [meaning the depositors] into equity [or stock]. In the U.S., the new equity would become capital in one or more newly formed operating entities. In the U.K., the same approach could be used, or the equity could be used to recapitalize the failing financial company itself—thus, the highest layer of surviving bailed-in creditors would become the owners of the resolved firm. In either country, the new equity holders would take on the corresponding risk of being shareholders in a financial institution.

No exception is indicated for “insured deposits” in the U.S., meaning those under $250,000, the deposits we thought were protected by FDIC insurance. This can hardly be an oversight, since it is the FDIC that is issuing the directive. The FDIC is an insurance company funded by premiums paid by private banks. The directive is called a “resolution process,” defined elsewhere as a plan that “would be triggered in the event of the failure of an insurer . . . .” The only mention of “insured deposits” is in connection with existing UK legislation, which the FDIC-BOE directive goes on to say is inadequate, implying that it needs to be modified or overridden.

I would encourage everyone to especially pay attention to what she has to say about derivatives.

Sadly, what is happening in Cyprus right now is just the continuation of a trend. In recent years, governments all over the world have turned to the confiscation of private wealth in order to solve their financial problems. The following examples are from a recent article posted on Deviant Investor…

October 2008 – Argentina’s leftist government, facing a gigantic revenue shortfall, proposes to nationalize all private pensions so as to meet national debt payments and avoid its second default in the decade.

November 2010 – Headline – Hungary Gives Its Citizens an Ultimatum: Move Your Private Pension Fund Assets to the State or Permanently Lose Your Pension – This is an effective nationalization of all pensions.

December 2010 – France agrees to transfer twenty billion euros worth of assets belonging to its Fonds de Reserve pour les Retraites (FRR), the funded portion of its retirement system, to help pay off recurring social benefits costs. No pensioners are consulted.

April 2012 – Argentina announces that its Economy Ministry has taken an emergency loan from the national pension fund in the amount of $4.3 billion. No pensioners were consulted.

June 2012 – Treasury Secretary Timothy Geithner unilaterally appropriates $45 billion from US federal pension funds to help tide over US deficits for the remainder of fiscal year 2011.

March 2013 – Open Bank Resolution finance minister, Bill English, is proposing a Cyprus style solution for potential New Zealand bank failures. The reserve bank is in the final stages of establishing a rescue scheme which will put all bank depositors on the hook for bailing out their banks. Depositors will overnight have their savings shaved by the amount needed to keep distressed banks afloat.Can you see the pattern?

As I wrote about the other day, no bank account, no pension fund, no retirement account and no stock portfolio will be able to be considered 100% safe ever again.

And once the global derivatives casino melts down, there are going to be a lot of major banks that are going to need to be “bailed in”.

When that day arrives, they are going to try to come after your money.

So don’t leave your entire life savings sitting in a single bank – especially not one of the banks that has a tremendous amount of exposure to derivatives.

Hopefully we can get more people to wake up and realize what is happening. We are moving into a time of great financial instability, and what worked in the past is not going to work in the future.

Steveo
is there a single person out there who does not believe in their heart that the system is now run by criminals 4/1/13
...