Canada is a Slave to Housing. This chart is from the August 2013 IMF study "The Driving Force behind the Boom and Bust in Construction in Europe" The Canadian population, in both public and private sectors, has been extremely dependent on housing as a percentage of GDP, well over 15% in 2011 compared to the U.S. and Germany at less than 5%. As the IMF study notes: "A rising construction share during the boom time means construction grows faster than GDP, and a sharp decline during the recession reverses the process." More at www.chpc.biz 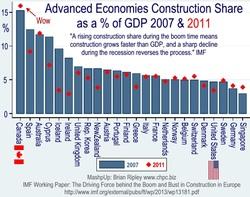