Here's a link to the chart if you are having problems seeing it through SocialTrade. 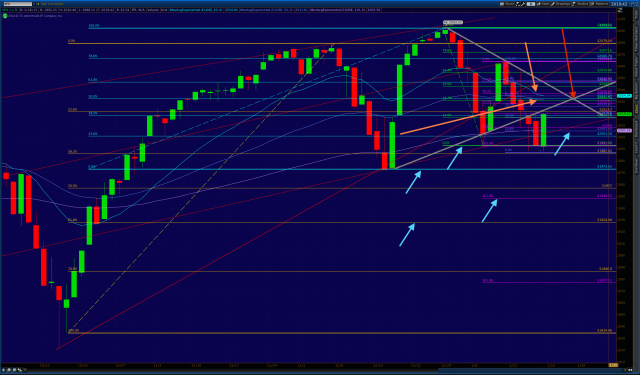 Pappy
In an attempt to be a more contributing member of society, if even briefly and to be something other than a general nuisance on this site I have decided to post my first chart. A quick thank you to @toad37 and @ClosingBasis for their contributions which this is based on. I took toads idea a few days ago about Fibonacci magnetism and went a bit crazy. I plotted the different retracements since the October low which gave me 5 as shown by the light blue arrows.

Then I took the trend lines from Closing Basis and added those which are shown in thick grey lines.

Finally I added the daily 20 EMA and the 50 EMA’s as pointed by the orange arrows.

The result is what I have dubbed the singularity, the red arrow, because not only of the confluence of technical analysis mumbo jumbo but that it also aligns with the ECB announcement on the 23rd of January where the two grey lines cross.

Also, there are two areas where the 5 Fib retracements are in a fuzzy alignment zone. The first is the 2019 level which we closed at Friday. The second is the 2034 level that aligns with the ECB announcement which getting there will not negate the current downtrend in play.

So we have the meeting of the 20 and 50 EMA’s, a confluence of 5 Fib retracements, and a crossing of two trend lines. Thats a lot of resistance. Which if the bulls can surmount, well that can’t be good for the bear case in the near term at least.

So I am imagine that this is where we will be by the announcement time. This is good place to go short if you believe we have another leg down. It will also be a good place for the bulls to see if the downtrend is over if we pick up the rising grey line as support.

Any thoughts appreciated and thanks to everyone for sharing their knowledge daily.

ZeroPointMind Φ
You may wish to check out the Fibonacci Queen's work. She uses Fibonacci clusters with amazing results. After studying her work I realized I was not using fibs correctly.