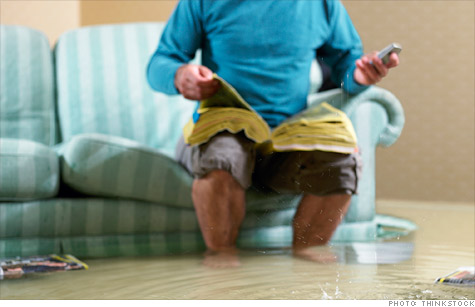 Homeowners who were underwater on their mortgages rose in the latest quarter, even though home prices have slowly started recovering.

NEW YORK (CNNMoney) -- Despite rising home prices, more than 30% of borrowers, or close to 16 million homeowners, were underwater on their mortgage during the first quarter, according to Zillow.

The percentage of borrowers who owed more on their home than it was worth increased to 31.4% during the quarter, up slightly from 31.1% three months earlier, according to Zillow. In the year-ago period, 32.4% of all borrowers had negative equity on their loan.

The uptick in underwater homeowners occurred even though home prices have slowly started recovering. On Wednesday, the Federal Housing Finance Agency reported that national home prices rose a modest 0.6% during the first quarter, the first price gain since 2007.

Nevertheless, the percentages of homeowners who were underwater on their homes remained high as delays in the processing of foreclosures kept many delinquent borrowers on the balance sheets, said Zillow. Once a bank repossesses a home, the mortgage holder's negative equity is no longer considered part of the tally.

"[It's] important to note that negative equity remains only a paper loss for the vast majority of underwater homeowners," said Stan Humphries, Zillow's chief economist. "As home values slowly increase and these homeowners continue to pay down their principal, they will surface again."

Negative equity is still a big risk, however, since it makes homeowners more vulnerable to financial setbacks, such as a medical emergency, job loss, or other unexpected expense. If they don't have their home's equity to fall back on, it increases their chances of spiraling down into foreclosure.

Having a high percentage of underwater homeowners is also bad for the economy because it can trap borrowers in their homes and prevent them from pursuing employment opportunities elsewhere, according to Humphries. That can make it more difficult for them to advance their careers and for companies to find skilled workers.

Where homeowners are struggling to stay afloat: Of the 30 large metro areas covered by the Zillow report, Las Vegas has, by far, the highest percentage of underwater borrowers at 71%. Home prices there are down a whopping 62% from peak, according to the S&P/Case-Shiller home price index. A quarter of Vegas borrowers owe more than double what their homes are worth.

Cities with fewer foreclosures, including Pittsburgh, New York, Boston and San Jose, Calif., all had less than 25% of borrowers underwater.

Has your employer slashed your health care coverage, 401(k) match, holiday bonus or annual raise? If so, please email jessica.dickler@turner.com with a brief description of your story and you could be included in an upcoming article.