As you can see, not only the A/R-mesures catching the frequency of the price.

The WL1 indicates, that a good correction is overdue.
Usually such trades look like stepping in front of a tank.

But hey - I have a swiss halberd in my bedroom... 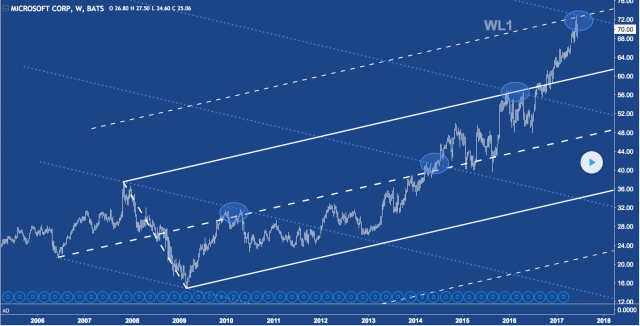 1SexyStud→ → → "GOODTIME"
Hey Forker:
Are you trading BRX https://www.investing.com/equities/brixmor-property
Thoughts on IKEA? https://en.wikipedia.org/wiki/IKEA
Is POTUS an investor? :
"Inter IKEA Systems collected €631 million of franchise fees in 2004, but reported pre-tax profits of only €225 million in 2004. One of the major pre-tax expenses that Inter IKEA systems reported was €590 million of "other operating charges". IKEA has refused to explain these charges, but Inter IKEA Systems appears to make large payments to I.I. Holding, another Luxembourg-registered group that, according to The Economist, "is almost certain to be controlled by the Kamprad family." I.I. Holding made a profit of €328 million in 2004.

In 2004, the Inter IKEA group of companies and I.I. Holding reported combined profits of €553m and paid €19m in taxes, or approximately 3.5 percent.[101] In 2013 the Daily Mail media publication reported that the IKEA subsidiary Swedwood had grown between 20-25% per year since its inception in 1991.[83]

The Berne Declaration, a non-profit organisation in Switzerland that promotes corporate responsibility, has formally criticised IKEA for its tax avoidance strategies. In 2007, the Berne Declaration nominated IKEA for one of its Public Eye "awards", which highlight corporate irresponsibility and are announced during the World Economic Forum in Davos, Switzerland.[106]

In a company statement emailed on 14 October 2013, IKEA's full-year sales rose 3.1 percent due in part to growth in Russia and China. IKEA's revenue total rose to US$37.9 billion (27.9 billion euros), with significant growth also recorded in North America.[107]

In February 2016, the Greens / EFA group in the European Parliament issued a report entitled IKEA: Flat Pack Tax Avoidance on the tax planning strategies of IKEA and their possible use to avoid tax in several European countries. The report was sent to Pierre Moscovici, the European Commissioner for Economic and Financial Affairs, Taxation and Customs, and Margrethe Vestager, the European Commissioner for Competition, expressing the hope that it would be of use to them in their respective roles "to advance the fight for tax justice in Europe."[19]" 6/17/17