2 weeks ago I suggested the DXY was about to fall (see previous post). I thought at that time the point".b" would stop at a 50% retracement but it continued to about a .62 correction before falling. Notice that the RSI formed a negative reversal followed by a bearish divergence: a combo that often leads to a decline.
Different projection methods suggest a near term target of around 89-90.
Notice yesterdays drop stopped at the potential mid- channel line. I would not be surprised to see a small bounce or hesitiation at this level before further decline.
Take care. Have a great week. 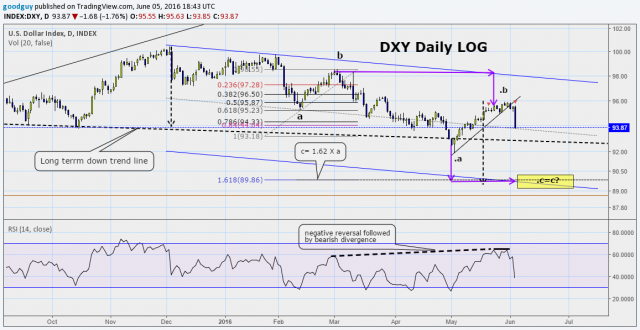 Dimon
RSI does not look bearish to me. Last 3 months lower lows of price have not been confirmed by new lows of RSI. Strong reversal in May mean something. Fundamental backdrop of May reversal could not disappeared last friday. 6/6/16

Dimon
Very interesting disconnect between WTI and the trade weighted US dollar index. Who's gonna give? https://research.stlouisfed.org/fred2/graph/?g=4DFD 6/6/16