Total existing-home sales, which are completed transactions that include single-family homes, townhomes, condominiums and co-ops, increased 3.4 percent to a seasonally adjusted annual rate of 4.62 million in April from a downwardly revised 4.47 million in March, and are 10.0 percent higher than the 4.20 million-unit level in April 2011. ...Total housing inventory at the end of April rose 9.5 percent to 2.54 million existing homes available for sale, a seasonal increase which represents a 6.6-month supply at the current sales pace, up from a 6.2-month supply in March. Listed inventory is 20.6 percent below a year ago when there was a 9.1-month supply; the record for unsold inventory was 4.04 million in July 2007. 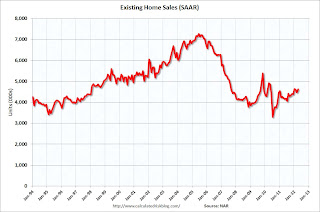 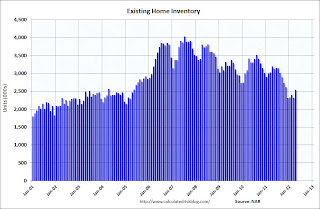 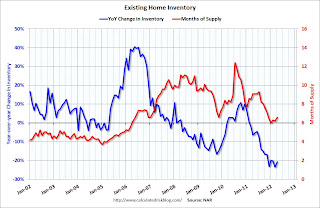 Inventory decreased 20.6% year-over-year in April from April 2011. This is the fourteenth consecutive month with a YoY decrease in inventory.

Months of supply was increased to 6.6 months in April.

This was slightly below expectations of sales of 4.66 million. I'll have more soon ...