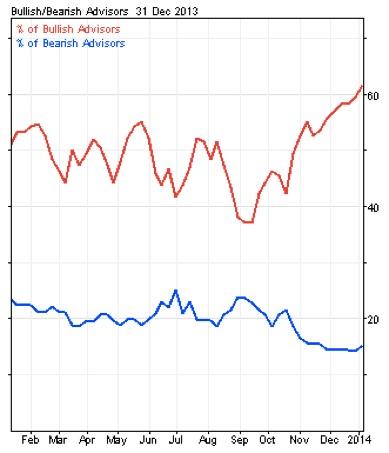 Dollar
The reading for the bulls was 61.6% to show a new six-year high. That is up 2% from last week and the sixth consecutive reading in danger territory above 55%. The last level was October 2007 when their count was 62.0%. The takeaway from the recent high bullishness is that professionals are near fully committed. Public funds are still moving into equities but they are traditionally late to the game. Excess optimism doesn't mean an immediate crash but certainly signals elevated risk with the danger of a retreat in the near term rather high.

The bears rebounded to 15.2% after reaching a 26-year low last week at 14.1%. We had to go back to 20-March-1987 to find a lower reading of 13.6%. Some former correction outlooks shifted more negative with the latest market highs. The bears say the strength of the market advance and lack of any negative trading means it is not sustainable much longer. Once the decline gets underway they expect it to quickly accelerate to the downside. So far they fail to provide either technical or fundamental support for that outlook.

Those looking for a correction fell to 23.2%, from 26.3% a week ago. The lack of any notable market retreat has seen their number steadily decline for weeks as they shift back to bullishness to miss further gains. Oscillating indicators are now at prior top levels and the favorable seasonality ends about the first week of January. It will be interesting to see if the correction count increases then. If it does, to confound those expectations, stocks could move even higher.

The spread between the bulls and bears increased further to 46.4%, from 45.5% last issue. Recent weeks have all been in negative territory with the widest difference for the year. The data is also above the 42.4% difference from October 2007. In contrast August 2013 ended with the spread at 13.4%, close to the 10% (or less) reading that allows for buying. Readings show increase risk of a market top. The bears haven't outnumbered the bulls (negative spread) since October 2011, after the correction from highs that April. Another way of viewing this is that the bulls are more than 4X the number of bears. Strong buying chances occur with a reading near 1X (or lower).