Quick Notes About the Unemployment Rate

Over the past several years people have dropped out of the labor force at an astounding, almost unbelievable rate, holding the unemployment rate artificially low. Some of this was due to major revisions last month on account of the 2010 census finally factored in. However, most of it is simply economic weakness.

Jobs Report at a Glance

Here is an overview of today's release.

US Payrolls +69,000 - Establishment Survey US Unemployment Rate rose .1 to 8.2% - Household Survey Average workweek for all employees on private nonfarm payrolls fell .3 hours to 34.4 hours The average workweek for production and nonsupervisory employees on private nonfarm payrolls was unchanged at 33.7 hours. Average hourly earnings for all employees in the private sector rose by 2 cents.

Nonfarm payroll employment changed little in May (+69,000), and the unemployment rate was essentially unchanged at 8.2 percent, the U.S. Bureau of Labor Statistics reported today. Employment increased in health care, transportation and warehousing, and wholesale trade but declined in construction. Employment was little changed in most other major industries. 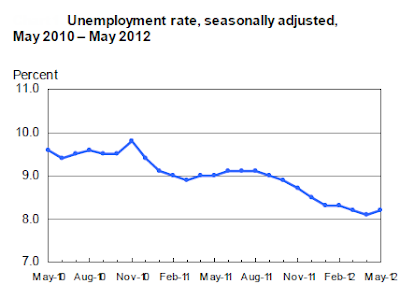 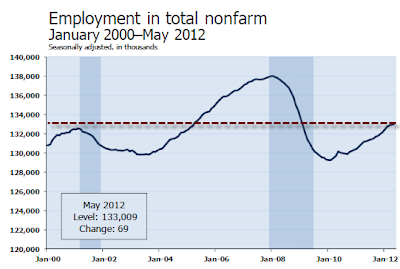 Employment is finally above the total just prior to the 2001 recession. 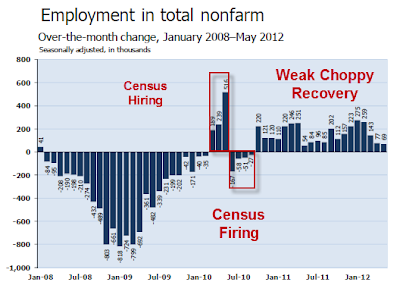 Statistically, 125,000+- jobs a month is enough to keep the unemployment rate flat. For a discussion, please see Question on Jobs: How Many Does It Take to Keep Up With Demographics?

The average employment gain over the last 27 months has been 139,000, barely enough (statistically speaking) to make a dent in the unemployment rate. 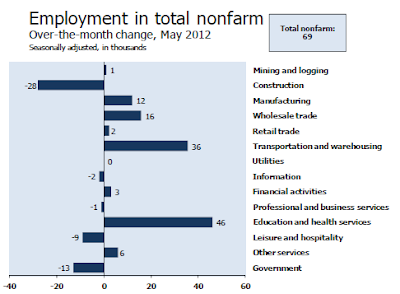 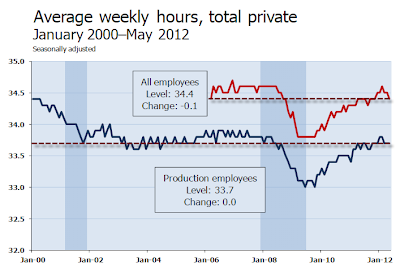 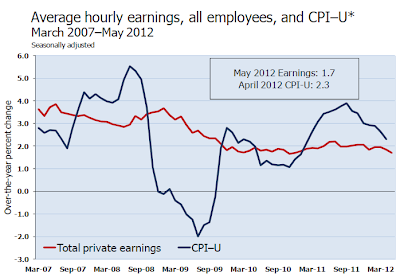 Except in the depths of the recession when the CPI plunged into negative territory, wages have not kept up with the CPI.

"Success" of QE2 and Operation Twist

Over the past 12 months, average hourly earnings have increased by 1.7 percent. In April, the Consumer Price Index for All Urban Consumers (CPI-U) had an over-the-year increase of 2.3 percent. For about a year beginning in late 2010, price increases outpaced increases in earnings. Since the third quarter of 2011, however, the gap between the two has narrowed.   Not only are wages rising slower than the CPI, there is also a concern as to how those wage gains are distributed. BLS Birth-Death Model Black Box

The BLS Birth/Death Model is an estimation by the BLS as to how many jobs the economy created that were not picked up in the payroll survey.

The Birth-Death numbers are not seasonally adjusted while the reported headline number is. In the black box the BLS combines the two coming out with a total.

The Birth Death number influences the overall totals, but the math is not as simple as it appears. Moreover, the effect is nowhere near as big as it might logically appear at first glance.

Do not add or subtract the Birth-Death numbers from the reported headline totals. It does not work that way.

Birth/Death assumptions are supposedly made according to estimates of where the BLS thinks we are in the economic cycle. Theory is one thing. Practice is clearly another as noted by numerous recent revisions.Birth Death Model Adjustments For 2011 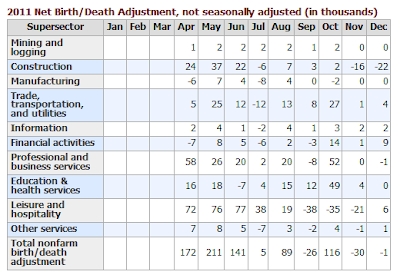 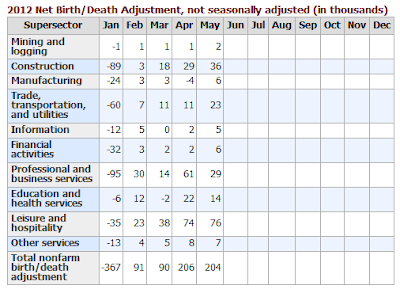 Once again: Do NOT subtract the Birth-Death number from the reported headline number. That approach is statistically invalid. 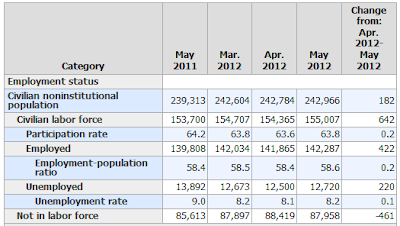 That is an amazing "achievement" to say the least, and as noted above most of this is due to economic weakness not census changes.

Were it not for people dropping out of the labor force, the unemployment rate would be well over 11%. 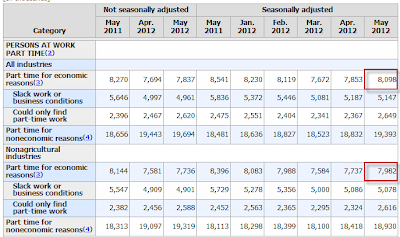 There are 8,098,workers who are working part-time but want full-time work. 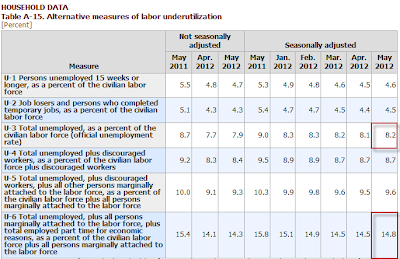 Table A-15 is where one can find a better approximation of what the unemployment rate really is.

U-6 is much higher at 14.8%. Both numbers would be way higher still, were it not for millions dropping out of the labor force over the past few years.

Note the huge drop in duration of unemployment in the 15-26 week category accompanied by an even larger increase in the long-term unemployed category.

Given the complete distortions of reality with respect to not counting people who allegedly dropped out of the work force, it is easy to misrepresent the headline numbers.

Digging under the surface, the drop in the unemployment rate over the past two years is nothing but a statistical mirage. Things are much worse than the reported numbers indicate.

Last month the seasonally adjusted Civilian Labor Force fell by 342,000. This month it rose by 642,000.This is beyond statistical noise, to the point of pure statistical bullsheet.