I have studied Treasury financing schedule (debt issuance and redemtion) which is available at treasury.gov. Q2 was a period when Treasury have redemted more than have issued new debt. They flooded market with 65 billions $. That's why the charts of Treasury Account and Monetary base both had very volatile behavior. This money with additional stimulus from central banks of Europe, Japan and China have boosted the markets. The good news is that Q3 will be the period of bears. The Treasury is going to suck from markets 155 billions $ during 3 months. The most part about 140 billions will be sucked during Jule and August. I guess it will make USD stronger and major market indexes weaker. I am not sure that 155 billions is enough to move SP500 down to february lows. By comparison, during November and December of last year Treasury have sucked 300 billions. During Q1 2016 they have sucked 250 billions, but the Treasury account mostly decreased in Q1 due to very big tax refund. 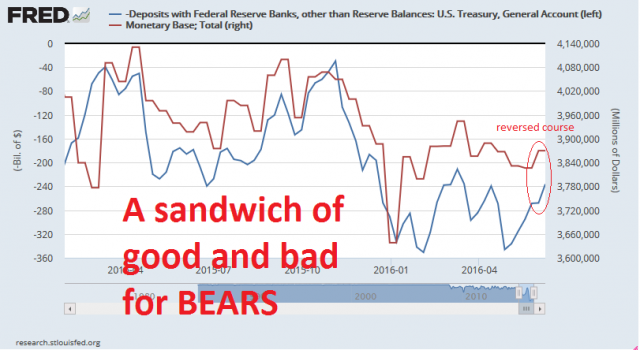 Dimon
Hope burns bright that Treasury will issue more debt than they expected in Q3 because of weak tax collections as it happened in Q2. The next TBAC meeting will be held in early august. They will adjust Q3 and release Q4 financing schedules. The Treasury is an elephant at a china shop :) 6/11/16