XLF - daily. Bears had their chance and they blew it. This is not investment advice. 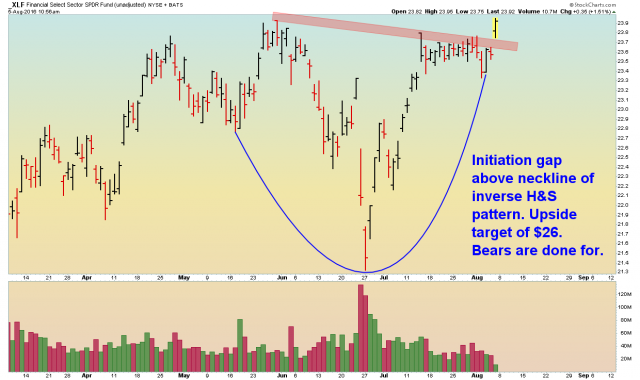 Dink
10 year yield has bottomed. I expect a rise over the next 30 years. Whether that rise is slow or fast depends on whether the global economic system crashes or not. 8/5/16

Silver Singularity
I think you are completely wrong on that one!
I mean why would rates rise from now as they falled the past 5 years? 8/5/16

Dink
@Silver_Singu: Another one of you guys asking, "why would things change from the last 5 years of trend?!?". Let me tell you a story, more Silver_Singu. Back in early November 2015, I posted a chart of GDX predicting an imminent bottom and rise to around $40. The comments I received from that chart analysis was the following: "lol" and "what causes gold to all of a sudden reverse a 4 year trend?". Well, obviously we know now that I was absolutely correct and not just with direction, but timeliness as well. Here is the link to the chart.

Dink
@Silver_Singu: Here is my point: price in auction markets is a discounting mechanism. Price will ALWAYS move before the fundamentals do. Determining future price trend based on fundamentals is often too difficult and costly to determine. Even if a fundamental reason for a price trend sounds exactly correct and makes perfect sense, how do you know that another fundamental input won't be more important? If I had a dime for every person that thought QE would lead to hyperinflation, well, I'd have a lot dimes. And ya know what, their reasoning was really good. It made perfect sense, but alas, as we now know, that fundamental argument didn't work out and in fact there were other fundamentals at play that predicted the true inflation trend, which was low inflation for years. The problem is determining which fundamental reason is correct. Both sides made great arguments. That is why we need to analyze price charts to help give us clarity. 8/5/16

Dink
If you want to see my latest analysis on bonds, see the chart below.

Silver Singularity
Are you part of the camp that think the fed will continue to tighten monetary policy in the next few years? 8/5/16

Dink
I don't think it necessarily matters for the long end of the yield curve. I think it possible that long rates will rise faster than short rates. Look what happened back in 2013 with the 10-year yield when the FED didn't even raise rates. I think it likely that will happen again. 8/5/16

Silver Singularity
I agree that treasuries prices are comparable to a bubble because rates shouldn't be that low, everybody knows that.
But for my part, the situation we have today is the opposite of 2013 (taper tantrum), we can discuss about that later if you want.
This bubble (treasuries) is too big to pop, exactly like in japan (look at long rates since 20+ years there, that's the kind of scenario I anticipate for treasuries)
So i'm convinced the risk has been transfered to the currency that denominates those treasuries. If the currency collapses that's the equivalent of bond prices going down (except for interest rates)
What do you think about that?
PS: that's why I don't think S&P will retrace the majority of the rise started in 2009 and that the bull market (in nominal) is far from over looking long term 8/5/16

Dink
Treasuries are not a bubble. They are acting like a bubble and can suffer the same price reversion as a bubble, but technically speaking it isn't a bubble. 8/8/16