What proves to be very important at the stage while market is consolidating is to have sound positions that reflect the view on the market. Regardless whether the outcome is "right" or "wrong" in terms of the trade, more important is not to have position somewhere in the middle of consolidation channel that will likely to cause loser in any outcome of the direction that market will choose. Last week CAC40 French index broke consolidation channel to the upside as anticipated, having said that i guess some less experienced traders were taken out as "stop hunting" took the place at around 3680's area in the first part of the week.

Dow Jones index (DJIA) finally hit anticipated 13640's area on Friday. Despite this level being major resistance level, taking a short position from there would be very much against current up trend that prevails. Personally this setup does not match my entry criteria as more confirmation is required in order to get involved. Having said that for someone with less conservative risk tolerance this may be good opportunity to get involved.

One of the setups posted on XAUUSD (Gold) last week completed itself with bearish BAT pattern shaping last week invalidating bullish Cypher at the same time. There was fair amount of pain with this setup already as price action went north straight towards stopping me out, touching initial X leg of a BAT pattern at least twice. The crucial point that allowed me to stay in this position was the fact that 1695's area was not broken. Discipline paid off so far and by the end of the week this short trade was slightly in the money. It is far too early to call this a winner yet, as targets had to be readjusted, however it is good example how important is to be patient and not call position a loser too early.

As of potential setups for the next there is only one setup worth attention in my book. EUR/USD FX pair channeled between 1.3266 and 1.34 for about two weeks after recent structure resistance became support. The market finished last week very close to bottom line of the channel which is also 0.382 fib retracement of the previous impulse leg. The area between 1.3280 and 1.3266 looks like a good place to get involved in uptrend continuation with stops far enough below 1.3266. If market curve will go opposite direction break below and close below 1.3266 will be strong signal for it. See the chart below. 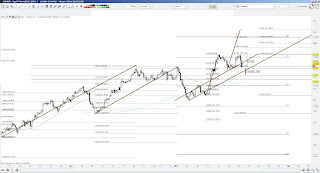 On a side note one very useful feature i discovered recently on my charting platform were pivot points, that could serve as good indication/confirmation to your own structure analysis. Another feature that could be much of assistance are footprint charts that seem to allow taking technical analysis from slightly different angle than traditional candlestick approach. Will be preparing post on it in the nearest future so stay tuned.

Have a profitable week traders!