Recently I said that Monetary base is acting as leading indicator for Stock Market Indexes. Now I found that there is correlation between Monetary base and inverted U.S. Treasury general account. If the Account increases (Treasury borrow) the Monetary Base is reduced. If the Account reduces (Treasury pay debt) the Monetary base is increased. In other words than more money Treasury has, the less money US stock market has and vise versa. U.S. Treasury is the power behind the FED throne nowadays (post QE period). Don't listen FED, keep a wary eye on Treasury actions. Treasury will issue more debt than pay debt in coming months according to information of wallstreetexaminer.com. I anticipate more decline of monetary base in coming months and a test of 2016 Q1 SP500 lows. 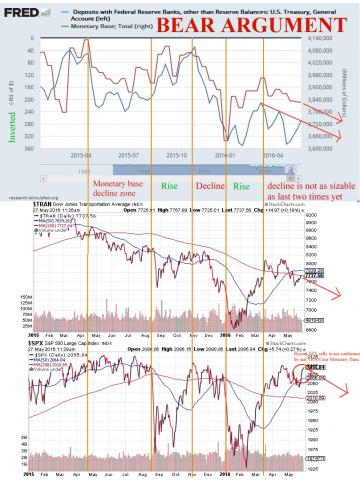