Let's go wild: I predict a gap down on SPY tomorow for a beautifull top island reversal! 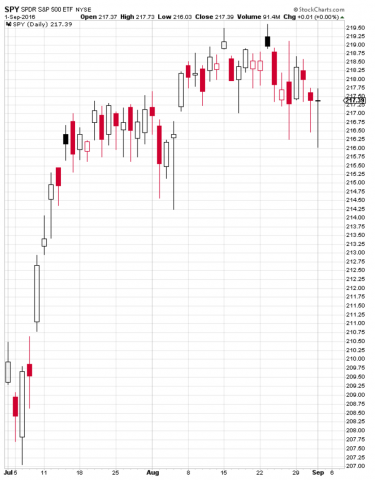 Daytrade
I certainly don't hope so... then that is 2 unfill gap above and then most likely will get filled... I rather we fill the one above then go down...

Job number, if is bad most likely going get bought up, because no rake hike... so I rather see a job good and then we go fill that gap and then crap... 9/1/16

Silver Singularity
There's no gap open above
only down, a gap is a hole in the graph (including shadows) 9/1/16

Silver Singularity
And whatever the jobs are the fed is NOT gonna raise rates anyway
Even if the number is 500k it doesn't matter!
Interest rates can't go up without collapsing the new system (started in 2012)
...and btw... we are in a recession or at the limit of being in
at least a big slowdown