The markets aren’t exactly a rich, loamy soil for planting prose these days, so I was trying to think 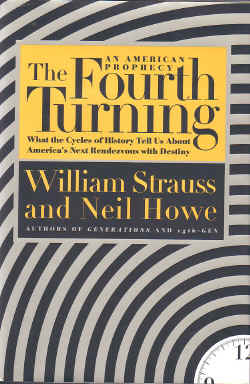 of something to write about this weekend. I glanced at my bookshelf and noticed a favorite of mine, The Fourth Turning: An American Prophecy – What the Cycles of History Tell Us About America’s Next Rendezvous with Destiny

, which a couple of readers have mentioned to me again recently. I grabbed the book on the way out the door, thinking it would be a terrific thing to write about.

With the thousands upon thousands of posts I’ve done on Slope, I often forget what I’ve written about in the past, and this was no exception. Before I started putting together my long post on the book, I did a search for “Fourth Turning”, and voila – – been there, done that.

On re-reading what I wrote nearly two years ago, I noticed a few things:

But the “turning” we are living in right now is, ostensibly, the “Crisis.” It sure isn’t acting like a crisis, is it? Real estate values around here are higher than they’ve ever been in human history. The stock market is at record highs. Not yearly highs. Not decade highs. Levels higher than anyone has ever witnessed. And for people in their 20s to become centi-millionaires and billionaires is starting to be seen as a birthright. Where’s the crisis?

Of course, under the surface, there’s plenty of suffering. True unemployment is still high; we live in a nation that depends on food stamps and handouts more than it ever has; and, ummm, that nearly $18 trillion of debt? It’s, ummm, never going to be paid back – – at least not with anything resembling true “money.” Maybe Obama’s successor can just make a special piece of US currency worth $18 trillion and hand it over and call it a draw.

This “crisis” we’re in is supposed to last until about 2025, so we’ve still got a decade left of crisis-ing, if these authors are anywhere close to correct. That’s plenty of time for other bad stuff to happen. And that’s plenty of time for Obama to get out of office and let his successor deal with the gargantuan mess that’s left behind.

However, I’m increasingly convinced that Obama and Yellen have the power and the guile to keep this house of cards from collapsing until the man is safely out of the White House. So, like everyone from Jim Cramer on up, we can all agree “this is going to end badly someday.” What’s maddening to me is that the “someday” – – – that is, a true cleansing and reformation – – – has been delayed to spare the 1% any of the pain, so we’re all going to have to endure something far worse once it finally comes. And when it does come, I don’t know what all this nonsense about “pitchforks” is – – because the super-rich will have the money, the personnel, and the weapons to protect themselves.

Oh, and incidentally, I am still going through the mountain of emails and comments folks sent to me with respect to the Slope business model. I’ll be doing a “Response” post this weekend………still way too much for me to absorb to get such a post done right now! Thanks, everyone. Your feedback was amazingly helpful.