Allow me to start off by sharing a comment posted on ZeroHedge this afternoon which must be the greatest comment ever made over there. It’s a lot of text, I know, but it’s spot-on. 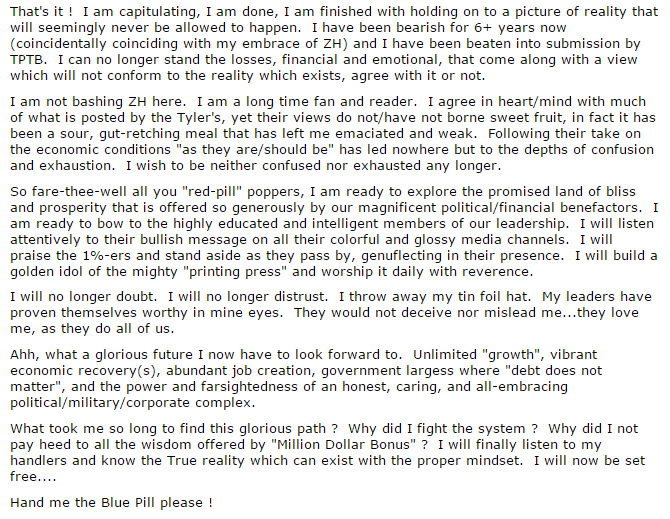 A far shorter comment was placed on Slope by Dutch, with which I must absolutely concur:

And I really do believe that. I have never in my life had a greater financial net worth, and at the same time, I’ve never had lower self esteem. I feel like the most idiotic, moronic, stupid, unlucky, cursed imbecile that has had the wretched misfortune of walking this miserable planet. I can hardly stand it anymore. I have no talent and no future.

I was thinking today about the “market” and its true nature, and it dawned on my pinheaded little brain that the equity market is like a comet zipping through the solar system. It has a trajectory and inertia, but it is affected by the gravitational wells of the objects it approaches. Relatively early in this bull market, there were some very big wells which bent the course of the comet dramatically. Indeed, it seemed like the comet would be thrown out of orbit (AKA a bear market). The debt crisis in the summer of 2011, for instance, was sort of like the comet passing by Jupiter.

As time went on, the gravitational wells got smaller. We kicked off 2016 with a really nice tumble, which was sort of the equivalent of the comet getting affected by Earth, and then most recently we had Brexit, which was more akin to passing by a large asteroid.

But you know what happened? Each and every time, the comet simply resumed its course. There was a curve, sure, and some excitement about this timing really being “it”. But without exception, in the end, it didn’t matter. It was just a temporary warp.

And thus, having reached this personal breaking point, I have decided that the status quo is going to remain utterly intact. I am not being facetious about the items below. I believe each and every one of them.

Simply stated, until such time as an utterly unexpected and uncontrollable monstrosity takes place, the above will hold true. Indeed, I believe a terrorist attack similar to 9/11 would only cause the market to drop for two days at the most. It would, at this point, require a nuclear detonation with at least 100,000 deaths to cause a drop lasting more than a week. Even after such an event, the markets would recover to new highs.

One day I’ll finally come to my senses and put an end to my misery. Until then, I’ll just keep doing this blog, since I suspect all the other efforts in my life will ultimately fail and, in the end, make everything I’ve ever done completely pointless and forgotten.