When I started this blog nearly eleven years ago, my intent was to share trading ideas and charts. Given the tens of thousands of posts that have taken place over that time, naturally some other content has entered the picture. Although I tend to keep my personal life rather private, I do like to share chunks of my life that I think are interesting and, possibly, instructive. This is one of those times.

It’s amusing to me that this is a tale that’s never occurred to me to share. I often worry about running out of things to say, since I’m not sure how many times I can successfully dip the ladle into the water barrel of my pathetic and tragicomic life and draw out something worth sharing. This story, however, occupied about a year of my existence, and although I haven’t planned out what I’m going to say yet, I’ve already decided this is probably going to require two posts to get through it all. So here goes:

As some of you know, I began writing quite early. I was writing for national magazines at 15

years of age, and I wrote my first published book at the age of 16 (I wrote a post about this book, The World Connection, which you can read here.) By the age of 17, everything was going right in my life. I had a gorgeous girlfriend (who is now my wife), a new Porsche, cash in the bank, reporters doing articles and news segments about me, and grades good enough to get me into the likes of Princeton and Brown. Life was good (indeed, it hasn’t been that good since). The photo on the right is me as a teenager at a trade show, signing copies of my first book. I suspect you can recognize me.

A year later, things weren’t going so well. Computer books weren’t selling anymore. I now had the expenses of an independent adult (as opposed to having the expense-free life of a kid living at home). And while I perceived myself as an entrepreneur, I wasn’t really sure what I was going to do with myself (in retrospect, one needn’t have this figured out at the age of 18, but I didn’t know that at the time).

It was clear I had missed the boat on personal computers. I was never going to be a Steve Jobs or a Michael Dell. Computers were already getting pretty mainstream. Sure, if I had been born about ten years earlier, and have been living in Cupertino, maybe I’d be one of the first guys at Apple. But I wasn’t, so I had to look for The Next Big Thing.

Around that time, I was reading more and more about something called a personal robot. Now, I had never had any particular interest in robots, but the more I read about them, the more convinced I became that robots in 1985 might be where computers in 1975 were. This was it! I got a second chance at being part of something big! Here’s a news piece at the time to show what sorts of things people were saying:

If you watched the above clip, you probably were able to divine that the robot shown (a “Topo” from a long-defunct firm called Androbot) could do pretty much two things: (1) roll around aimlessly (2) utter words in a really bad Stephen Hawking voice.

And in spite of all the talk by the Androbot execs about how the robots would later “do the dishes, cook food, buy you groceries……..” the simple fact of the matter was that these things were useless toys. I didn’t want to see that, however, because precisely the same things were said of personal computers back in the 1970s. I know, because I had heard it. Now that computers were all the rage, I figured that robots, too, would follow this analogous path.

I set about writing a book on this topic, and so I had a book published by McGraw-Hill called Probots and People. And, as young as I was, I started not one, not two, but three different businesses to take advantage of what I hoped would be a big new industry. I opened up a mail order outfit called Valley Robotics to sell robot kits and ready-made personal robots. I started a magazine with the oh-so-clever title of Personal Robotics Magazine. And, most important of all, I decided to open up a chain of stores (in the spirit of ComputerLand) called Robot Center.

I’ll pick up this tale tomorrow to let you know how it all went down. 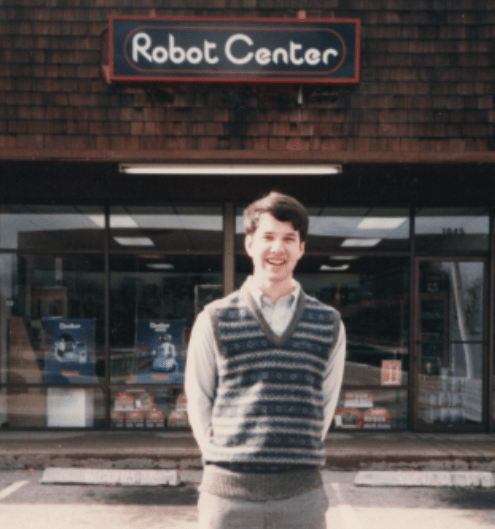