I am busy preparing dinner for my family, but blogger’s guilty strikes again, and I don’t feel comfortable ending the day with a sourpuss post with hundreds of comments in it. So I’ll talk about Tesla………briefly.

A few weeks ago, I did this post called The Tesla Top, in which I announced that, for the first time, I was doing the unthinkable – shorting Tesla. This is something that I pledged never to do, because there are some stocks (Priceline, Chipotle) that seem to go up and up and up with no reason or explanation – – and Tesla was on this “do not touch” list.

All the same, the general point of my post was that I was totally underwhelmed by the Model X, with respect to its marginal improvement over the S, and my hunch was that the shares were ripe for a fall. Well, you know what’s going on after hours……. 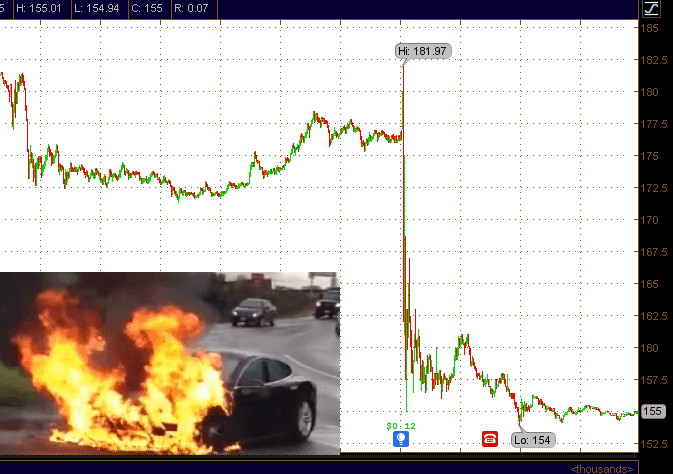 What’s kind of funny to me is that SolarCity, which doesn’t even report until after the close on Thursday, was falling in sympathy – – because – – well – – it’s another Elon Musk company. Makes no sense, right?

In any case, I have a strange lack of fear these days. It’s kind of a relief to be shed of it. I had a terrific Tuesday, in spite of the market’s retard-o-strength, and as I stand here, typing away, the ES is up nearly 7 points. And I raise my middle finger at you, ES, as do my 135 short positions. The rot beneath the surface is in full swing. Crap like Tesla is just the beginning.