Like a lot of people through the years, I had a fairly lousy time socially in the eighth grade. I had just moved to the Bay Area, and as a smart, gentle kid, I made an easy target for bullies. I didn’t go to a rough school at all, but still, there are going to be a few assholes anywhere you go, and my new town was no exception, and they had no trouble sniffing out the nice guy for verbal abuse. (One of the few kids who was consistently nice to me was pretty much the first girl I met out here who, incidentally, became my wife and mother of our children).

Having survived the eighth grade, I was looking forward to a new start by moving on to high school, at which a majority of the jerks who had singled me out would not be going. Starting the 9th grade, however, it became clear to me quite soon that this was no bully-free zone either. One guy in particular, Bob Kully, targeted me from the first day of school.

I am very good at reading people, and I could see right away this guy looked like a bully. He had that brusque, not-too-bright countenance that belies a cruel heart, and sure enough, he and his flunkies wasted no time picking on me at gym class.

After a few days of this, I was crestfallen, because I had been really looking forward to a better school experience (I feel in good company, since Steve Jobs and Elon Musk were both abused relentlessly by scumbags during their own time in school). I went to the guidance counselor and asked as diplomatically as I could to change gym classes.

He told me they simply didn’t do that, and that I should tough it out. Well, I’m not the sort who accepts no for an answer, so I cranked up the emotions and practically begged him. With tears streaming down my face (I have no shame when it comes to getting what I want), I pleaded with him to make the change. He finally relented, and Bob Kully no longer shared gym class with me. I was allowed to change my schedule.

Even with his limited cranial capacity, Kully was able to figure out what had happened, so he still tried to pick on me at a distance. I distinctly remember walking down the hallway between periods one day, and he smacked me really hard in the center of my chest. I guess he was disappointed I had made myself unavailable to his abuse. That was, to this day, the only time in my relatively long life that anyone has laid a finger on me. I have, by that reckoning, led a life devoid of physical violence.

My high school career improved steadily from there. Indeed, the 10th grade through 12th grade were the best years of my life, particularly since I began to succeed financially by writing software, software reviews, and books. Articles were written about me all over the world (literally), and television crews appeared at my house to interview me. I was having a fantastic time, and dickheads like Bob Kully were in the rear view mirror of my new Porsche, which I had bought with some of my newfound earnings.

All the same, I’m a sensitive soul, and the scars from such experiences have never fully healed. These experiences shaped who I am as a person, and some of those characteristics that promulgated from these events are, in my opinion, character flaws I’d rather not have. My worldview and personality were definitely affected by bullying. I’d be a much better person today, I believe, if I had been spared this kind of crap, and I will shell out a million dollars to pay for the highest-end private education available for my children that has, to date, shielded them from the Bob Kullies of the world.

I was reminded of this a few days ago when I saw this flash across my Facebook news feed: 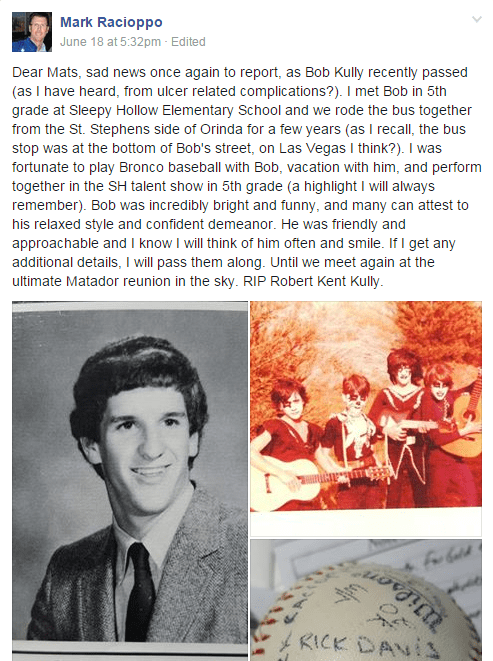 In spite of the fact this guy hasn’t been in my life since freakin’ 1980, my immediately reaction to this news was: “Good!” I had nothing to gain from this guy’s death. He hasn’t existed to me, as far as I was concerned, for the vast majority of my life. But I’m a petty soul who really never lets go of a grudge, so I felt some kind of cosmic justice had been proffered.

I’m politic enough to not post “Good Riddance” in the comments section, and we’re told not to speak ill of the dead (a maxim I’m clearly violating by means of this post), but I was at least curious to see what others had said. 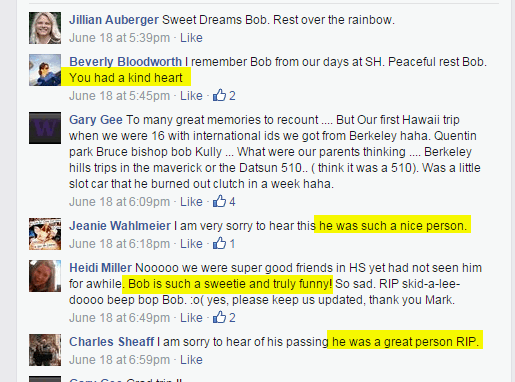 Kind heart? Nice person? Sweetie? Are you kidding me? This guy was one of the most mean-spirited pricks I had ever met in my life! What were these people thinking?

Was he simply so expertly two-faced that he managed to hide his evil side from others? Was I the only person ever to appear in his life that he targeted? Surely not. Perhaps he was able to fake himself effectively enough for high school girls (which is an understandable motive) that he left these kinds of impressions.

This “mis-remembering” of the past resonated with me because of a different experience I had this week. From time to time, Slopers have mentioned a person who runs a blog about Elliott waves, and they’ve said good things about his work. I checked out his work again, which I hadn’t done in a while, and I liked it enough that I decided to do something I never, ever do – – pay for someone else’s opinion. I wanted to subscribe.

For some reason, the form on the site didn’t work, so I wrote a polite email, explaining my interest in subscribing and saying how positively both I and my readers viewed his work. My expectation was he would write back, pleased at my note and offering a suggestion on what was going on with the form.

Instead, I received an utterly rude email (sent, oddly, three times) saying that I had promised him a link on my site in exchange for a free subscription in 2010, and that I promptly removed the link once the subscription was live. In other words, I tricked him into giving me free access and then reneged on my part of the deal. So, he told me, he thought it was “ironic” I would dare write to him, and he said he would have turned down my subscription even if the form had gone through.

I was reminded of one of my favorite Star Trek quotes from the episode Court Martial:

SPOCK: Lieutenant, I am half Vulcanian. Vulcanians do not speculate. I speak from pure logic. If I let go of a hammer on a planet that has a positive gravity, I need not see it fall to know that it has in fact fallen.
SHAW: I do not see what that has to……
SPOCK: Gentlemen, human beings have characteristics just as inanimate objects do. It is impossible for Captain Kirk to act out of panic or malice. It is not his nature.

When this guy wrote to me with his story, it didn’t ring true. I know myself. I simply don’t act like that. I keep my promises. I am polite to a fault. I don’t say one thing and do another. But since the events he described took place over four years ago, I hurriedly examined all my email archives and Slope archives to piece together what had happened, since I was distressed to think I had left such an impression.

I won’t bore you with the details, but suffice it to say that after a thorough examination of the facts, I found I had utterly held up my end of the deal. There was never a “link exchange”. Slope has never even had a link exchange, since I’ve always thought blog rolls were a bit silly. But the quid pro quo described, as well as the supposed reneging on my part, were fiction.

After laying out the facts to this chap, he didn’t even bother with the courtesy of a reply (had I been him, I would have been ashamed and embarrassed and written back not only with an apology, but a free subscription). So by his actions, this guy has transformed me from (1) a person who had very positive feelings about his work, a desire to give him money, and a willingness to promote his site to (2) a person who thinks he’s a jerk. A pointless waste, wouldn’t you say?

Know yourself. Know your behavior. Be consistent. Be the sort of person who doesn’t have to wonder if he did or didn’t do something in a certain way, even if it took place years ago.

Consistency is just a different word for integrity. Kully might have been the nicest bloke in the world to most of the kids in high school (or at least the prettier girls). Who knows. But he was an asshole to me, and he damaged me, so much so that his death means nothing to me, and I in fact celebrate his departure from this earth.

And it does strike me as odd that over the past several weeks, I keep getting word of people who have been unkind to me who are dropping dead at an early age. I’m dead serious (so to speak) about this. I’ve either become psychokinetic, divine revenge is being foisted, or I just happen to live in a time of extraordinary coincidence.

None of this does me credit. But I’ve found that being open here on my tiny corner of the Internet has, on the whole, been the right decision, so, for better or worse, I’ve done it again.