I took a month off last month and it was very good to have a break.  I'm excited to "get to" put this together and see what the data is telling us.  As of Friday, October 21, the equity markets have stabilized a bit after a thrashing and we are back to the 1235 level on the SPX.  Earnings have been mixed and there have been some misses that shocked the world and then some beats that have been quite good.  Overall, I didn't expect this earnings season to be all that bad, but the next one should be more than interesting.

Investing in these markets is quite perilous as 2% moves up and down intraday are not signs that we are investing in a healthy market.  Rumors and rumors of rumors result in absolute face-ripping turns that can leave your rear and your portfolio aching.  It is important that you slow down and remember the risk rather than focus on the money you are not making by being in a trade.  I've had several email conversations this week with people that were upset they were "missing it".  Don't worry, there will be another trade after that one.

Let's dive in shall we?

2011 continues to track right on par with 2010 on a non-seasonally adjusted basis.  From an economic perspective one might suggest that this is bearish, yet oddly I find myself noting that despite all of the ominous double-dippiness that I see, it is quite positive to see that we are tracking right along with last year and not falling.  This is based on the assumption that many folks have that 2009 and early 2010 were essentially pulling forward all sorts of demand (and that was the case for cash for houses and cash for clunkers), but at least in the midst of this "pull forward" 2011 has been able to match that transport demand punch for punch.

What does this graph tell us?  Simply that we are better off now than we have been in terms of moving stuff compared to anytime in the last 2 years.  It is not a huge revelation to note that we are not near the 2006/2007 excessive peak of everything.

Crushed Stone - I've finally found a reporting source for crushed stone transportation since Railfax went to a subscription model (greedy 1%ers!)  Here we find much the same that 2011 is right on target with 2010.  Unfortunately for commercial builders, this indicator is telling us that there is no real demand for commercial building at all.

Here is nice graph I pulled from the Railtime report that highlights a concerning trend.  See the red line there?  That is showing that since March of 2009 manufacturing inventories were at significant lows.  As we've mentioned often, the red line demonstrates that the climb in inventories has fueled much of the consumption of raw materials and the illusion that the economy is a lot better.  Now that we are near peak levels reached in 2007 and 2008, where do we go from here?

The WLI from ECRI continues to show weakness and point toward a "new recession".

Euribor continues to remain stubbornly high for this type of credit environment.  Euribor is the rate in which banks can borrow from each other in Euros.  While the absolute levels here are nowhere near the highs of the past in "normal" credit markets, given the scary lending environment the Eurozone is in now, the uptick in rates over the last two months is indicative of the stress between counterparties.  Despite being told that a solution is in the works to the Greece solvency problem, we've seen other dominoes fall.  The "dominoes" are weak banks that are exposed to bad sovereign debt.  These include Dexia, and a few other French banks.  These rates seem to be on their path higher…..again. 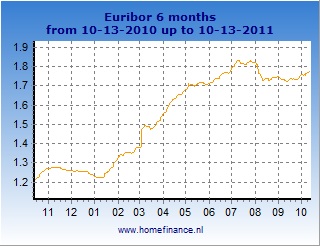 PULSE OF THE ECONOMY - http://www.ceridianindex.com/

I'll be very interested to see the results of next months report from the UCLA/Ceridian Fuel Index.  Readers should recall that the Ceridian Index monitors the fill-ups of truckers across the country and in turn, this fueling activity gives us an idea of how the economy is doing in real-time.  Over the last couple of months we've seen a slow-down in these figures and this is an indication that a recovery is on the skids.

The Monster.Com Index shows a reading of 148 which is actually very good.  The print represents a 7% year-over-year gain, but more importantly the figure is the highest level we've seen in a very long time.  The Monster.Com Index measures the number of on-line job listings available.  Obviously in this graph you can tell that September is seasonally the most active job posting month, but when we continue to hear that there are just no jobs available, we must question the common wisdom.  Perhaps some of the OWS guys can use some of their down time to hop online and apply for one of those "fair wage" jobs they are demanding.

The late September release of the MIT/Moody's Transaction Based Index show some positive news, however the release captures data from the month of July.  The month of July noted an increase in transaction price of 5% which is quite good given the circumstances of the economy.  Obviously the follow on months of August and September will be critical and we'll keep watching them. 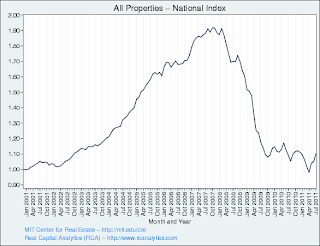 Alan Greenspan better take notice as scrap metal prices are plummeting.  Since their peak in February, metal prices have fallen.  Mr. Greenspan used scrap metal as an indicator for the health of the economy.  I'm wondering how healthy the economy looks given the almost 20% drop in the index.

Bloomberg's Financial Condition Index is also suggesting that we are in recessionary territory.  Any level under 0.00 gives us the information that the economy is contracting.

After reaching multi-year lows in February, the BDGI seems to have found some footing.  and the spot rate shipping index has almost doubled.  Unfortunately we need to resist the desire to rush out and buy shippers as I recently read a story that noted that shippers have another huge delivery of ships coming online in the next several years.

The dance of the USD continues as each Eurozone fix rumor creates massive gains and losses in the USD.  September's spike in the dollar has been met with October's destruction in the greenback.  The volatility will continue till we see some sort of resolution from the ECB, IMF, and Euro countries.  A very cursory look at this chart suggests that their may be a small move higher in the dollar and then a continuance of the larger trend down to retest 74.  If that does happen, the equity markets will enjoy a healthy rally.

Well I've kept the Coppock Indicator warmed up and up to date despite my belief that it is pretty worthless.  I've tracked this indicator for more than a year now and as I noted when I started, it didn't have much predictive power, and doesn't seem to have much still.  Recently I did a post on the notion that the slope of the moving average had something to do with the predictive capabilities, but I'm  not sold.  Needless to say, the Coppock Indicator for September was still in "sell" mode and thus the big rally over the first weeks of October would have been missed.  Coppock needs a close over 12,500 to earn a buy turn signal.

As bearish as I sound on many posts, I am not as bearish as I could be and actually feel a bit positive.  Employment measured in the Monster.com Index is up, real estate transactions (commercial) are getting better, rails are shipping as much or more than last year, and input costs are falling (copper, scrap, etc).  There are serious headwinds, most notably a lack of any confidence in the sustainability of the "recovery" and of our leadership in the political sphere.  I think this is exactly the kind of environment that could foster upside surprises in terms of economic performance since everyone is just so darn pessimistic.

The last two weeks of rallying has saved the bulls and charts have made some really compelling progress to bolster the bullish case.  As I type this, I am reminded that these markets have tended to move into territory lately that "bolsters cases" and then suddenly destroys that case in an instant.  With that in mind we'll pretend that the Eurozone issues don't exist and we're simply going to look at the charts and attempt to discern where we could go!

$SPX looks strong here for a move to the 1275 area as this would be essentially the 200 day moving average.  As I discussed in the earlier USD chart, this type of move higher in SPX would result as a drop in the USD paved way for the equity market rebound.

14/40 CROSSOVER - On a much longer time frame we get a sense that perhaps all things are not well with the indices as we see that on the 14/40 chart of $SPX that the 14 Day EMA on a weekly chart is still below the 40 day EMA.  This is essentially still a hold bonds not equities signal here.  While not pictured here, the MACD is turning up, but that doesn't change that the longer term call here is still bearish till we see a cross back over.

Finally, let me share with you a couple of perspectives on specific names.

FCX - Put this one on your watch list.  I have been playing this one long and short all week, but am out of the name as of today.  The move into the $36 area from the $34's yesterday makes this one in no-man's land.  However, if we do see a continued rally in the Euro, we'll see commodities run up and FCX has been strong despite falling copper and gold.  A continuation of this move could lead to much higher prices in FCX near the $45 level.  If we get a move to $38.25 and it is repelled, it might be a good play to short.  If $38.25 holds well, a short trade may be the play with a low $32 handle as a target.  In the near term, here are the levels I am watching.

INTC – While the FCX play is bullish I have been watching and shorting Intel.  Oddly, I actually like INTC alot, and had identified it as a great "defensive" name due to the high dividend when the stock was trading near 19.00.  Unfortunately I missed that entire run as I was over thinking it.  Now, despite my admiration for the dividend and the good results the company posted, I find that a 30% + move in a couple of weeks is just too much.  Look at how INTC has struggled at the $24 level.  If this isn't a good opportunity to short, I don't know what is.  I'm setting a tight stop at $24.75 and letting this one go with a target of $21.50 as a retracement to the 50 D MA and then possibly a $19 target again where I'd then flip and go long. Finally, you'll note on the chart that INTC is at a point that is 2 standard deviations above the longer term average which is essentially the 200 day.  This seems that the move up has been a bit overdone, therefore it reinforces the bearish posture in this trade.

Well, that's enough for me today.  Please check out the blog often as I'm back and enjoying my publishing outlet again!  Please visit Goatmug and share your comments at http://www.goatmug.blogspot.com/