AAPL pulled back today without breaking above the +1 level of its uptrending regression channel, as shown on the Daily chart below. It has moved in cycles since its June 2011 low…pulling back on overbought readings of my short-term RSI indicator, and traditional MACD and Stochastics indicators…and after briefly breaking above the +1 channel level.

At the moment, there is a negative divergence on my RSI indicator and on Stochastics…MACD is still rising. Near-term support sits at, first, Monthly VWAP (broken yellow) at 417.63, then Monthly Volume Profile POC (yellow horizontal lines) at 413.86, and then the channel "mean" (broken pink) at 406.83.

As can be seen from the one-year Volume Profile at the right edge of the chart, volumes above 410.00 are very thin and do not support sustainable higher prices at this time. Although volumes have been rising over the past few days, they are well below the high levels during previous cycle rallies, as are all the volumes from its November 2011 cycle low. As such, I'd be wary of buying any breakouts above today's high on what could turn out to be a "dead cat bounce" here. I wouldn't be surprised to see a re-test of the November low in the near future. I am aware, however, of upcoming earnings on January 24th…as such, market makers may try to run the price up until then. 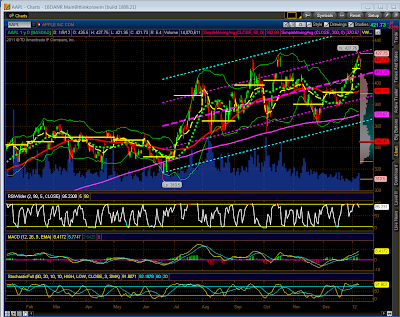 With pre-Christmas consumer spending reaching an all-time high since 2000, as reported today (see graph below courtesy of www.Forexfactory.com), it may be that consumers have reached their limits on their credit and are now stuck with paying down more debt than ever before…which may have an impact on future APPL product purchases 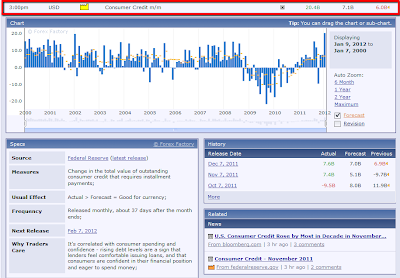