These excerpts are from an article printed by The Globe and Mail on January 6th:

"Canada is not technically in a recession, but to the vast majority of consumers, it feels like one.
Economists, Statistics Canada and the Bank of Canada have been telling Canadians the country has been out of a slump since mid-2009, and is now well into a period of expansion. But Canadians see things differently. Despite the economy’s relative strong health in a world marked by tumult, they are the most pessimistic they’ve been in over a decade – and fully 70 per cent believe the nation is in a recession, according to an annual tracking poll released Thursday."

"There has certainly been an ample amount of economic news of late to trouble Canadians, including the fiscal and monetary crisis in Europe, volatility on capital markets, hints of a possible slowdown in China, rising oil prices and negative employment numbers in Canada in three of the past four quarters. And household debt has reached record levels in Canada, prompting Bank of Canada Governor Mark Carney to warn last month that “our greatest domestic risk relates to household finances.” Meanwhile, forecasters have warned that Canada’s 13-year housing boom has reached its end."

Here is a link to the article:
http://www.theglobeandmail.com/report-on-business/economy/growth/vast-majority-of-canadians-believe-country-is-in-recession/article2292215/

Some economists believe that the pessimism is just a reflection of world economic problems, since GDP numbers don't add up to recession at the moment. However, data released on January 6th showed that Canada's jobless rate rose for a third month in December, the longest advance in two years, to 7.5% from 7.4%, as reported by Bloomberg: http://www.bloomberg.com/news/2012-01-06/canada-s-jobless-rate-rose-for-third-month-in-december-to-7-5-.html

The combination of this survey and rising jobless rate may, in fact, be a warning, this time, that a recession is coming to Canada.

Below are a series of charts/graphs which compare the S&P 500 Index with Canada's TSX Index (courtesy of www.Stockcharts.com).

The first chart represents one year…the SPX has rallied to a much greater extent during the fourth quarter of 2011…while the SPX has gained 0.31% during this one-year time period, the TSX is still in negative territory at -8.44%. 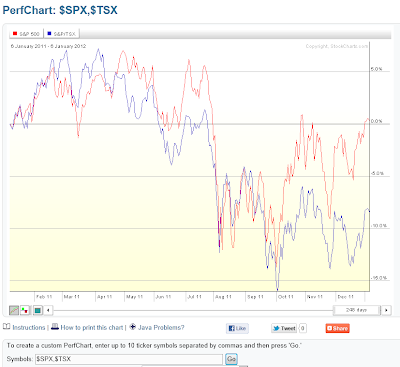 Taking a closer look at the third quarter of 2011, the next chart begins from October 3rd and shows that the SPX gained 16.25% from this date, and the TSX gained 8.33%. 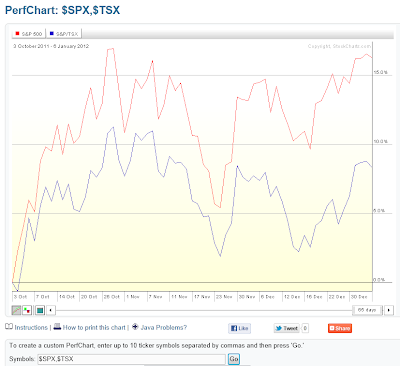 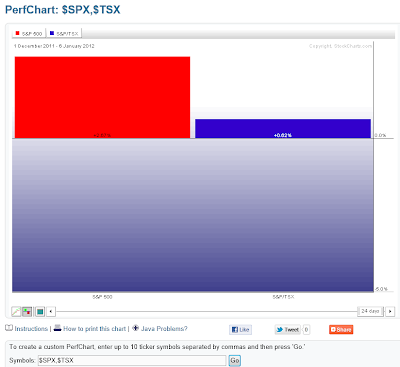 The next chart begins last Tuesday. The SPX gained 0.06% from this date, and the TSX is down at -0.16%. The rate of deceleration on the TSX has accelerated on each subsequent day last week in comparison with the SPX, as depicted by the following 3 graphs. 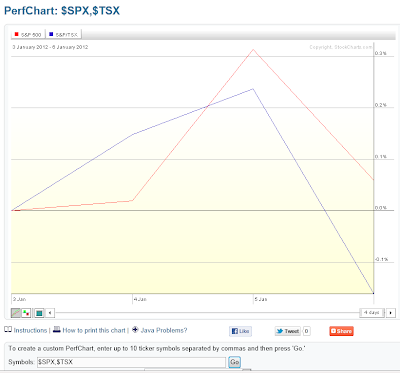 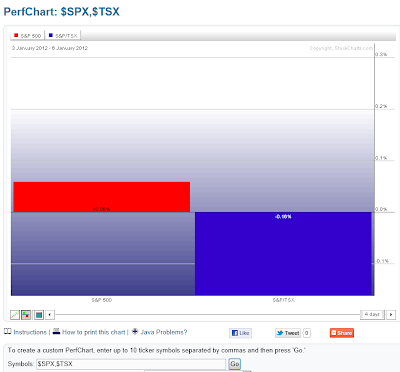 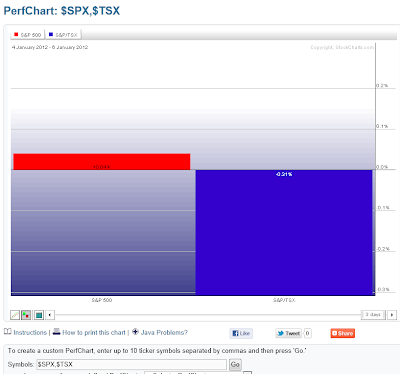 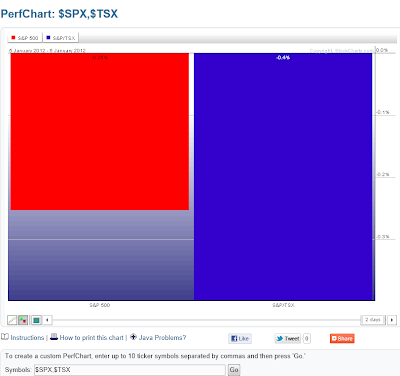 Canada's stock market index, TSX, is still lagging that of the U.S. stock market index, SPX. It appears to be affected by outside influences (i.e. global issues) more than the SPX and may, therefore, be more subject to volatility. It was leading the SPX during the latter part of the first quarter of 2011, but was the first to signal weakness in April. December has been a weak month for the TSX, as has been the first week of January…something to keep an eye on to see if this weakness continues and whether it continues to accelerate…and whether it, ultimately, influences the SPX.

https://slopeofhope.com/2012/01/are-we-canadians-simply-a-pessimistic-bunch.html
Are We Canadians Simply a Pessimistic Bunch?