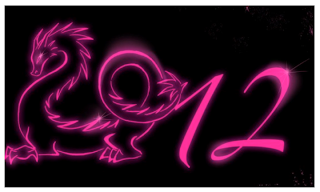 2012 is the Chinese Year of the Dragon (the Water Dragon, to be more specific). These two links to Wikipedia provide a bit of information about this zodiac sign:

This excerpt from Wikipedia describes Chinese dragons:
"In contrast to European dragons, which are considered evil, Chinese dragons traditionally symbolize potent and auspicious powers, particularly control over water, rainfall, hurricane, and floods. The dragon is also a symbol of power, strength, and good luck. With this, the Emperor of China usually uses the dragon as a symbol of his imperial power."

This excerpt from Wikipedia describes water:

"Water (Chinese: 水; pinyin: shuǐ), is the low point of the matter, or the matter's dying or hiding stage.[1] Water is the fifth stage of Wu Xing.
Water is the most yin in character of the Five elements. Its motion is downward and inward and its energy is stillness and conserving. It is associated with the Winter, the North, the planet Mercury, the color black, cold weather, night, and the Black Tortoise (Xuan Wu) in Four Symbols.
It is also associated with the moon, which was believed to cause the dew to fall at night."
This is the Wikipedia link to Water:
http://en.wikipedia.org/wiki/Water_(Wu_Xing)

The Chinese Shanghai Stock Exchange Index is still in downtrend on its Daily timeframe, as shown on the 1-Year chart below. There is a positive divergence forming on the RSI and the MACD, with a MACD cross. As well, an inverted Head & Shoulders pattern may be forming…however if the right shoulder breaches 2150, this formation would be called into question…one to watch for any potential drag on the U.S. markets if a lower low is made. However, like its Water Dragon Year, 2012 may become its low point for this index before staging a rally. 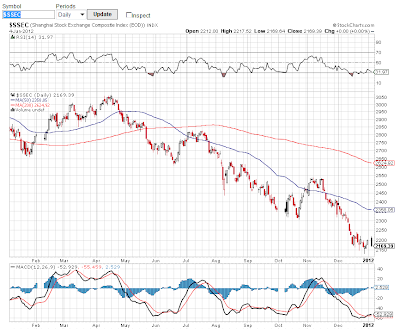 The 3-Year Weekly chart below shows this index is re-testing a prior support zone from February/March 2009. This index has been weak since it peaked in July/August 2009. 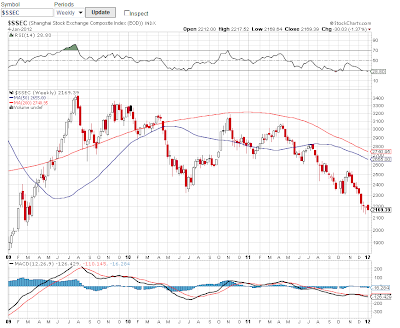 https://slopeofhope.com/2012/01/chinese-dragon-about-to-blowhot-or-cold.html
Chinese Dragon About to Blow?