That's the message I heard in today's press conference from Fed Chairman, Ben Bernanke, following the release of today's FOMC statement. As he mentioned, the current unemployment rate is above the Fed's targeted range, while inflation remains contained within the upper end of their current targeted range. Since he is, apparently, prepared to give leeway over and above the current 2% inflation rate in order to ease credit to stimulate job creation and the housing sector, I can interpret that to mean that the markets, in general, are not yet overbought…my assumption is that news should be received favourably by the stock market bulls.

By the way, it seems to me that an apparently stable stock market (i.e. proceeding in an orderly uptrend and higher than today) by the time the 2012 U.S. election is underway would not give Republicans cause to complain about the effectiveness of President Obama's policy measures during his term in office…an "offshoot benefit" of this "dual mandate" policy. So, I'll say that greed is good, particularly for the Democrats this year. While the VIX remains at low levels, the fear factor is, indeed, gone.

That being said, I would note the following with respect to support and resistance levels that I mentioned in my post of January 20th on the Major Indices. I'm adjusting some of these levels now since some resistance levels were broken and closed above today. The revised levels are as follows:

To continue along this bullish scenario, please refer to the Weekly charts below of YM, ES, NQ & TF. I've drawn an upward-trending channel, several trendlines, and a Fibonacci Extension from the 2011 lows. In a broad sense, and from today, I'll assume that this channel will remain in effect until such time as it is breached and this upward trajectory reversed on this weekly timeframe. I'll revisit these charts on a weekly basis to see where the markets are, particularly in relation to the mid-point of the channel (broken green line)…at the moment, the upper Bollinger Band (which is widening suggesting continued buying) is roughly in line with this middle channel line on the YM, ES & TF, while the upper-quarter channel line is in line with the upper Bollinger Band (also widening) on the NQ.

A 100% Fibonacci extension (pink) from the 2011 lows to November lows would place an upside target price at:

If the support levels can be maintained on the Major Indices, as noted above, there is a strong likelihood that these targest can be realized in the near future. However, with such a wide channel in effect, there is a possibility that there may be some downside movement before then, while maintaining the integrity of the channel and the November lows 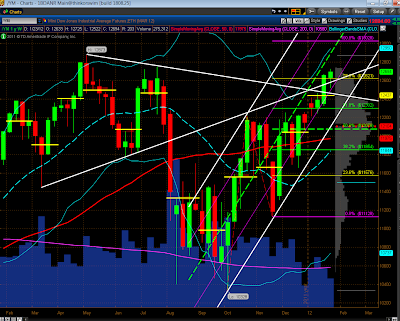 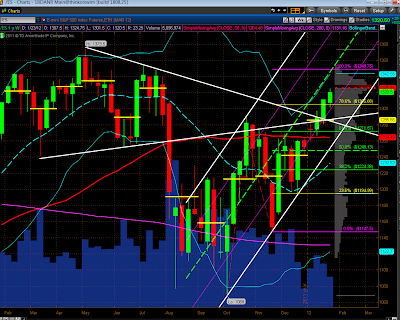 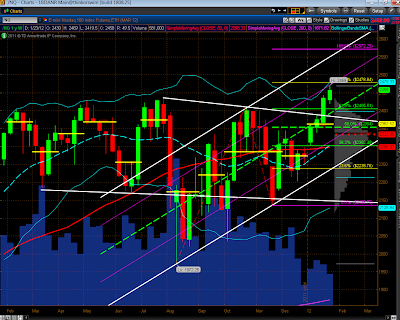 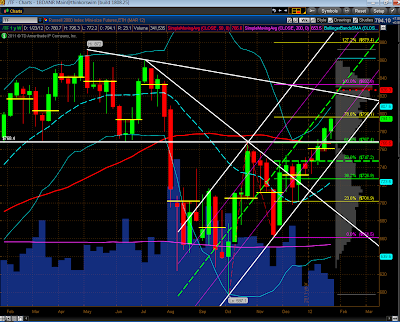