Below are two 3-year Daily charts. The first chart is of an ETF containing high dividend-paying stocks, DVY, and the second is of the Emerging Markets ETF, EEM. Inasmuch as the Major Indices are near major resistance levels, as mentioned in my post of January 20th, I thought I'd compare these two ETFs to see where money flows over the next days/weeks. I'll say that DVY represents value stocks and that EEM represents the more risky, volatile growth stocks.

DVY made a 3-year high on January 3rd of this year and is currently holding above last month's Volume Profile POC (horizontal red line) at 52.81. It has been in a daily uptrend since its December lows. If traders are interested in purchasing additional value stocks, I'd expect to see DVY break and hold above its high of 54.63. 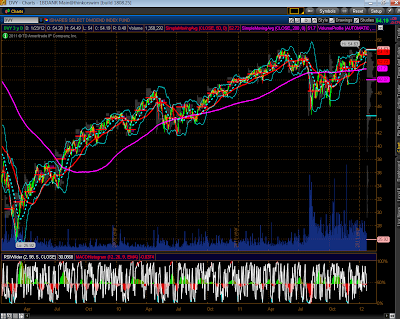 In contrast, EEM made a 3-year high on July 2, 2011 and has retraced almost 50% from its October lows. It is currently holding above last November's Volume Profile POC, after a lower POC was made in December. It has also been in uptrend since its December lows. It's approaching resistance around 42.90. We can see that it is forming two interesting patterns…the first, a larger Head & Shoulders pattern with a neckline around 38.50 (pink horizontal line), and the second, a smaller Inverted Head & Shoulders pattern with a neckline around 42.90 (blue horizontal line), which also happens to be the right shoulder of the larger H&S pattern. If traders are interested in purchasing additional (higher risk and more volatile) growth stocks, I'd expect to see EEM break and hold above the IHS neckline of 42.90, and the yellow downtrend line just above. 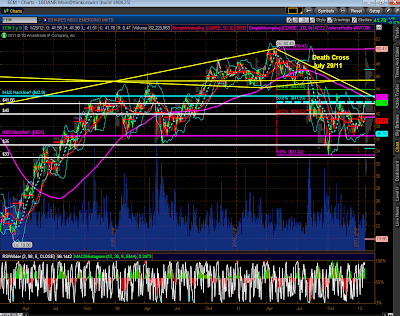 The two graphs below shows a comparison of percentages gained and lost so far during two time periods on DVY and EEM, as well as on the Major Indices.

The first graph begins at the May 2, 2011 high of EEM until today's close. The second graph represents price action from January 3, 2012 to today's close. The first graph shows an overall gain in percentage from the May 2nd high for DVY, with EEM still in negative territory. The second graph shows a greatly reduced gain in percentage for 2012 for DVY, with EEM gaining the most. 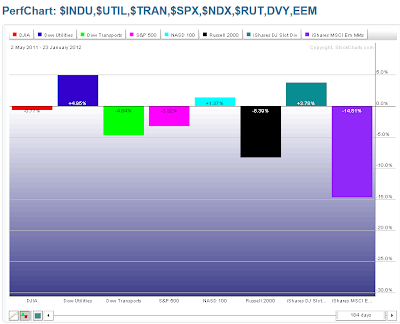 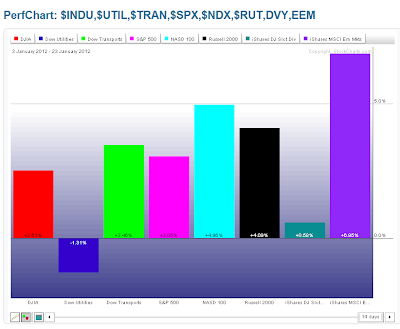 In conclusion, using the reference points as noted above on the Daily charts in combination with these graphs, we can track to see whether money flows into or out of these value vs higher-risk, volatile growth ETFs over the next days/weeks.