The Nasdaq 100 Index was the biggest gainer, with the Dow Utilities the biggest loser, compared to the Dow 30, Dow Transports, S&P 500, and Russell 2000 Indices, as shown on the 4-Day graph below (courtesy of www.Stockcharts.com). 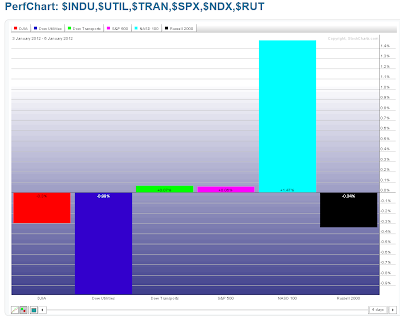 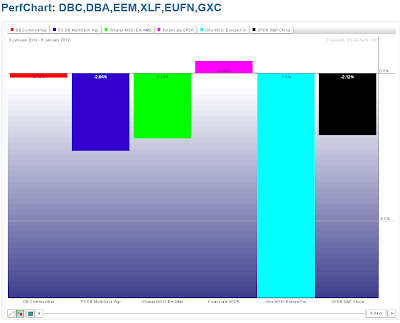 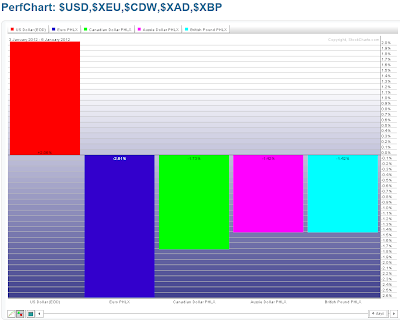 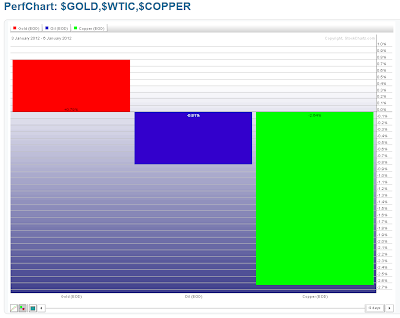 From these graphs, we can see that the U.S. $ gained the most at 2.06%, followed by a gain of 1.47% in the Nasdaq 100. The Dow Utilities made a modest loss, Copper, Agricultural Commodities, Emerging Markets, and the Chinese Financials made further losses, while the Euro and the European Financials made considerable losses. With the 10% drop in volatility, this may set the stage for a possible breakout and rally in Equities. On the surface, it looks like institutions are willing to park their $ in the U.S. equity markets, as well as in the U.S. $, in spite of weakness in Chinese, Japanese and European markets.

I'm still mindful, however, of comments made in my post of January 3rd (stocks above their 20-
Day, 50-Day and 200-Day Moving Averages are still sitting near major resistance levels): http://strawberryblondesmarketsummary.blogspot.com/2012/01/this-weeks-big-questionwill-todays-gap.html 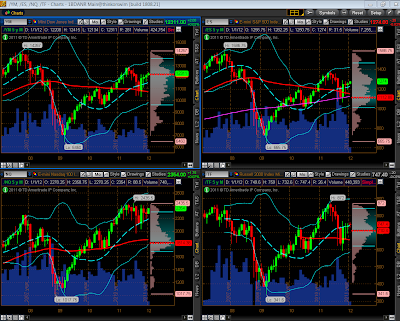 Below is a 1-Year Daily chartgrid, with the Volume Profile noted for this period at the right edge of the charts, and with the Monthly Volume Profile POC (yellow horizontal lines) also shown for each month. They are all at or near their top Bollinger Band and above the 50 sma. The YM and NQ are just above the Yearly POC, while the ES & TF are considerably below. The YM, ES & NQ are above the 200 sma (pink), while the TF is just below.

They are all trading above December's POC. The YM & NQ are trading below July's POC, and the ES & TF are still trading below June's POC, which is lower than July's. On this timeframe, I'd place support and resistance at these Monthly POC levels, as follows: 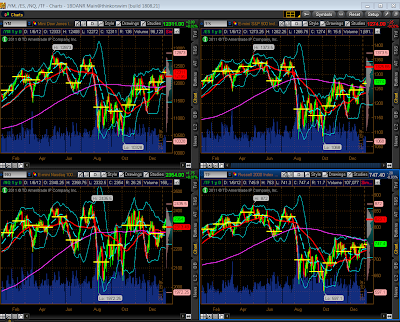 Below is a 4-Day 30-Minute chartgrid, with this past week's Volume Profile at the right edge of the chart…the POC is shown in red within the profile, and is extended as a yellow line to the left. As can be seen, the only e-mini that moved above the POC was the NQ, indicating that risk appetite went into the Technology sector for the week (and slightly into the Financials sector as noted above), while the others simply traded in a range.

I'd look for a breakout and hold either above or below this past week's Volume Profile high/low on all 4 e-minis before trying to determine short-term trend from here…however, because volumes were still lower than normal this past week, I'd look for higher volumes in order to confirm any sustainable breakout/breakdown. I'd also watch to see if the 50 sma can remain above the 200 sma on any pullback within their range in order to assess developing bullish-versus-bearish sentiment. In this regard, near-term resistance and support levels for this intraday timeframe are as follows: 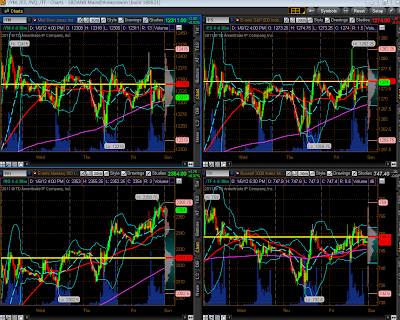 Of interest, as well, will be the U.S. $, as it attempts to break and hold above price and regression channel confluence resistance at 81.76ish, as shown on the Daily chart below…a break and hold above this level could send it to the next resistance level of 83.40ish…near-term support is 81.00 (prior attempts to hold above this level have failed since November, 2010, so it is an important level for the $ bulls to hold). 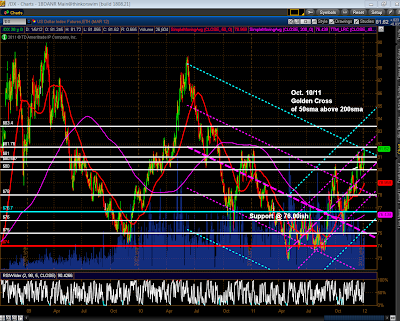