Further to my post of April 9th, Toronto's TSX Index closed below major support of 12000 today, as shown on the Daily chart below. All of 2012 gains (and some of 2011) have been erased after prices peaked in February. Price is, once again, back down at bear market levels seen immediately after S&P's downgraded the U.S. credit rating in August of 2011. 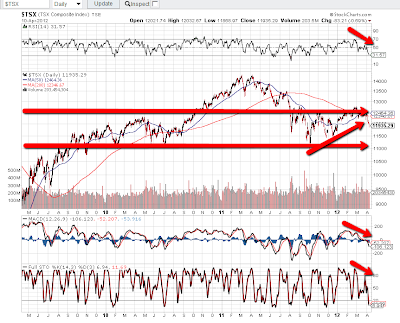 Furthermore, as shown on the graph below, the TSX has lost 16.26% from its March 2011 highs…also interesting to note is that Copper has lost 18.64% during this time, as well, and is well below that post-August 2011 credit rating downgrade level…note today's 3-year high volume spike on the Daily chart of Copper below…ones to watch.