An e-mail from one of my Blog readers this weekend inspired me to write about the following…so, first of all, thank you, kind reader, for writing.

With price sitting just above a major uptrend line from the 2007 lows, as well as horizontal price support, this Weekly ratio chart of DBC:SPX shows that price may be due for a bounce on DBC, theCommodities ETF. If price can rally, break and hold above, firstly 0.02 where there is a convergence of resistance of the 50 sma (blue), 78.6% Fibonacci retracement level, and a short-term downtrend line, it has a chance to reach the 0.022 level, which is currently sitting just above the 200 sma (red), and, potentially, the 61.8% Fibonacci retracement level just above 0.023, or higher.

If equities weaken, we may see this scenario occur. However, we could also see cash flowing into both equities and commodities. It may be that money is/will be flowing out of Bonds to fund such activity…I last wrote about 30-Year Bonds in my post of January 18th…they are worth tracking over the next week(s)…with the Fed busy buying Bonds, it may be difficult to determine how much private money is flowing out of them…time will tell, as may the charts. One thing that may provide a clue on this is if we see increased buying volumes on equities and commodities and increased selling volumes on Bonds. 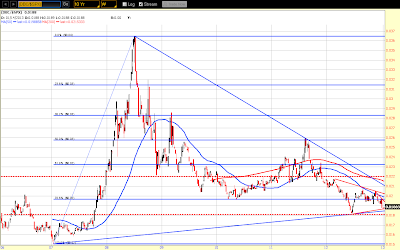 Below are Weekly charts of DBC and the AUD/USD Forex pair. DBC has broken above a medium-term downtrend line and is sitting at its mid-Bollinger Band…and volumes have increased recently.AUD/USD looks poised for a breakout above its medium-term downtrend line…two to watch to confirm the above potentially bullish scenario for Commodities, in general.

I also wrote about the U.S. $ in the above-referenced post…also one to watch, along with volumes, to see whether the dollar weakens considerably to support such an equity/commodity-buying scenario. 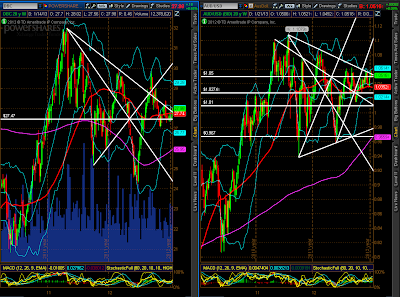 As well, my last post outlined a bullish scenario for Platinum and Gold…two to watch to confirm any general bullishness in Commodities, as I've described above.

The Weekly chart below of Copper shows that it, too, is poised for a breakout, one way or the other. 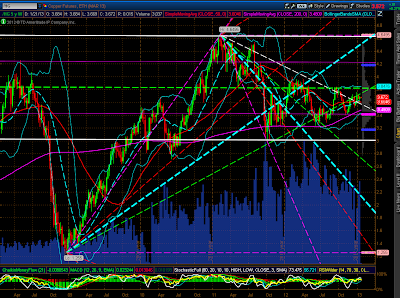 Lastly, the Weekly chart below of Oil shows that, if price can remain within its large rising channel, it has a chance of reaching 100, or higher. 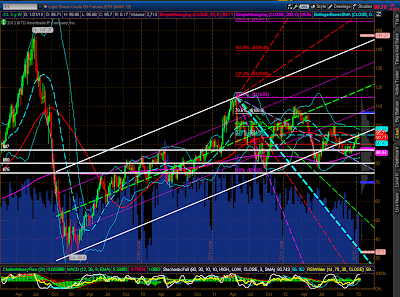 Increasing volumes may hold the key in determining/confirming the seriousness and sustainability of any pullback or breakout.

https://slopeofhope.com/2013/01/commodities-poised-for-a-bounce-by-strawberry-blonde.html
Commodities Poised For a Bounce? (by Strawberry Blonde)