I'm aware of three types of gaps — usually occurring in a sequence in a
trend:

We'll see, in time, if today's
(Wednesday's) gap on the TF is a Continuation Gap. If so, then it has a long way
to, ultimately, run before it hits the third type…essentially another 100
points, or so, to around 950…although, not likely straight up! I would note
that the Breakaway Gap (which began the current uptrend) remains
unfilled.

Since the formation on the 60 min (market hours only) chart
below resembles that of an inverted Head & Shoulders, this target could be
actualized…the timing, however, is unknown. 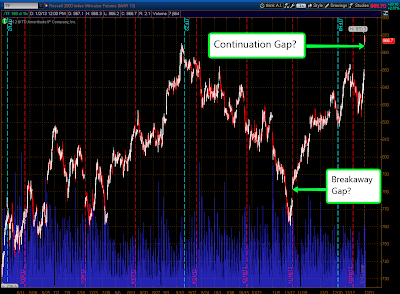 Price could,
potentially, simply continue rising along the upper edge of the channel (shown
on the 60 min market hours only chart below) to defy any overbought conditions.
Or, it could zig-zag upwards within the channel to reach 950-970 by the end of
February 2013. That would tie in with the date by which Congress will have to
reach an agreement on the rest of the "Fiscal Cliff" issues, as well as raise
the "Debt Ceiling Limit." 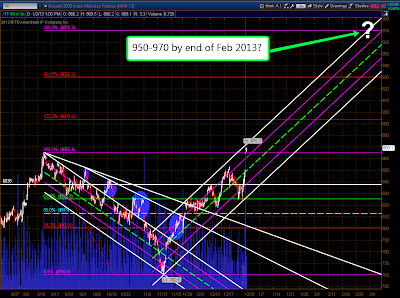