I wrote about the Commodities Sector ratio of DBC:SPX here on January 20th. DBC had been underperforming the SPX, essentially, since mid-2011 and was in a large triangle formation on the Weekly timeframe.

Since then, it has weakened further to make a lower low and has broken below triangle support, as shown below on the Weekly ratio chart of DBC:SPX. There is a slight positive divergence on the Momentum indicator, but it has not hooked up yet. 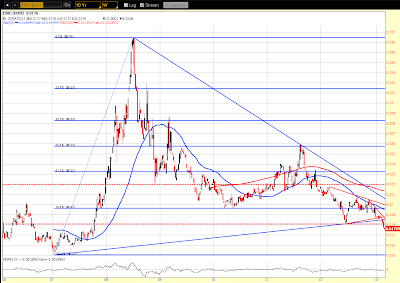 DBC has also made a lower low in a downtrend in between the Weekly 50 sma (red) and 200 sma (pink) below a major support level of 27.47, as shown on the Weekly chart below. Of note is last week’s volume spike and this week’s bounce, thus far.

The AUD/USD forex pair is also in a downtrend on the Weekly timeframe, as shown on the chart below. It has bounced this week from a major support level at 1.01 and is trading just below major resistance at 1.0274-1.03ish. 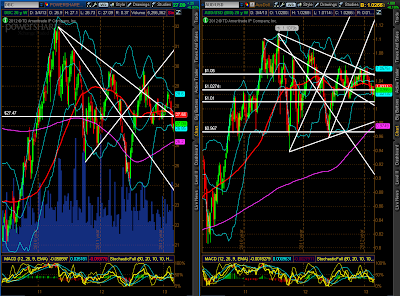 Otherwise, we may see considerably more weakness in the Commodity sector, and possibly, in the Aussie $.