I’m still digging into the new Slope, which looks pretty impressive so far. Just thought I’d take a moment to share something that caught my eye about SPY and GLD. Happy Easter to Tim and the Slope community.

GLD versus SPY in Q1

The SPDR S&P 500 Trust ETF (SPY) dramatically outperformed the SPDR Gold Shares ETF (GLD) in the first quarter of 2013, as the chart below illustrates, but, interestingly, GLD is considerably less expensive to hedge over the next several months. 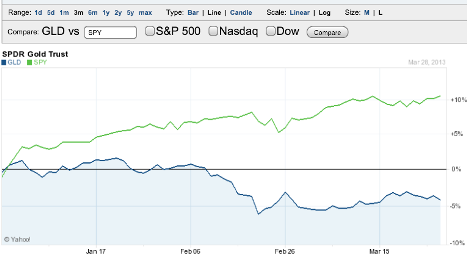 Low Volatility On Both Gold and S&P 500

Both GLD and SPY are inexpensive to hedge over the next several months, as you might expect from their low expected volatilities over the near term. Nevertheless, the difference in cost, as a percentage of position, is quite striking looking at hedges expiring in September. Compare the two screen captures below.

These were the optimal puts*, as of quarter-end, to hedge 1000 shares of SPY against a greater-than-15% drop between March 28th and September 20th. 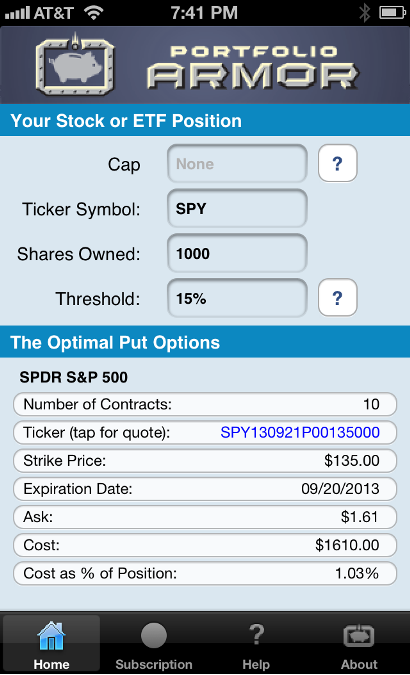 As you can see at the bottom of the screen capture above, the cost, as a percentage of position value, was 1.03%. Note that, to be conservative, the cost is calculated based on the ask price of the optimal puts; in practice, an investor can often buy the puts for less (i.e., some price between the bid and ask).

And these were the optimal puts to hedge 1000 shares of GLD against the same 15% drop over the same time frame. 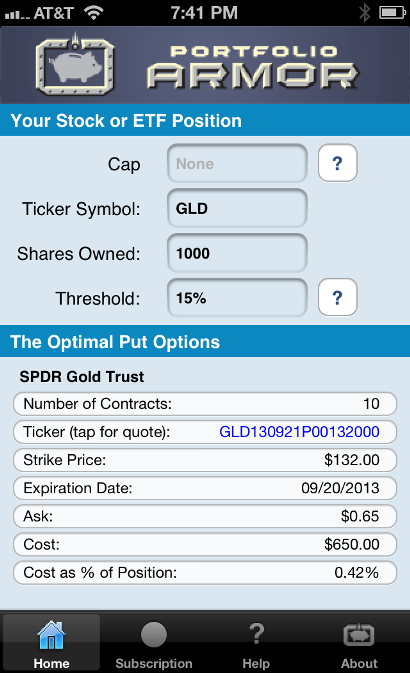 As you can see at the bottom of the screen capture above, the cost, as a percentage of position value, was 0.42% — roughly 40% of the cost of hedging SPY.

*Optimal puts are the ones that will give you the level of protection you want at the lowest possible cost. Portfolio Armor uses an algorithm developed by a finance Ph.D. to sort through and analyze all of the available puts for your stocks and ETFs, scanning for the optimal ones. The screen captures above are from the Portfolio Armor iOS app.