Further to my last Weekly Market Update, this week's update will look at:

As shown on the Monthly, Weekly, and Daily charts below of the Major Indices, the Stochastics indicator is well in overbought territory on all timeframes (although the NDX and RUT are slightly below on the Daily timeframe), and the Indices are range-bound and trading at/near all-time highs.

I mentioned in my post of February 27th that "market participants have recently been favouring large-cap, more defensive, stocks over riskier, high-beta small-cap and tech stocks, as they have been grinding higher toward their all-time high levels. I'll be watching to see if money begins to start flowing into small-cap and tech stocks any time soon to signal that the markets are willing to take on more risk that may be needed to push all of the Major Indices to new all-time highs and sustain that kind of momentum going forward for the balance of the year. Otherwise, we could see some serious profit-taking and pullback begin in the not-too-distant future in all Indices."

I would mention that the reward/risk ratio for entering new long positions looks way out of proportion and overvalued at current levels…a multitude of stops would likely be situated beneath these 2-month ranges and could be taken out in an instant on any kind of decent pullback, thereby contributing to downside momentum and producing a large increase in volatility. I'd be looking for sustained, increased volumes on any kind of breakout and hold above this range to convince me that a new rally was, indeed underway and one that could be believed and supported by market participants for some time to come. Otherwise, we could very well see that pullback occur, sooner rather than later. 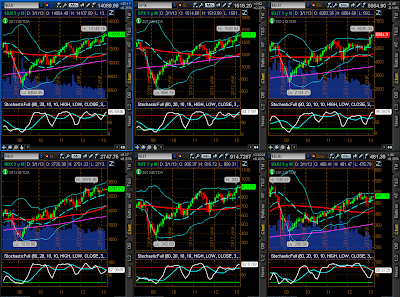 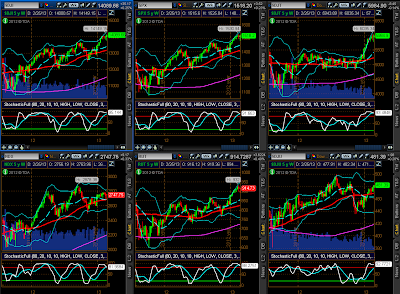 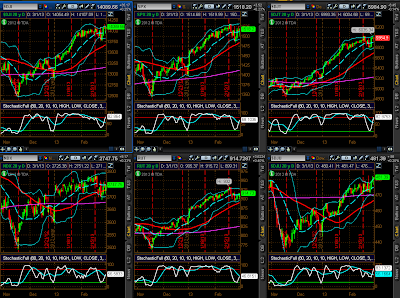 The 1-Week percentage gained/lost graph below of the Major Indices shows that gains were made in all of them, except the Russell 2000 Index. 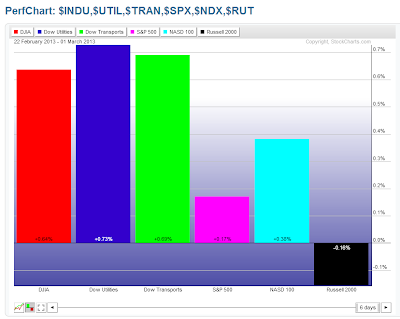 As shown on the Monthly, Weekly, and Daily charts below of the Major Sectors, the Stochastics indicator is well in overbought territory on all timeframes (although some are slightly below on the Daily timeframe), and the Sectors are range-bound. 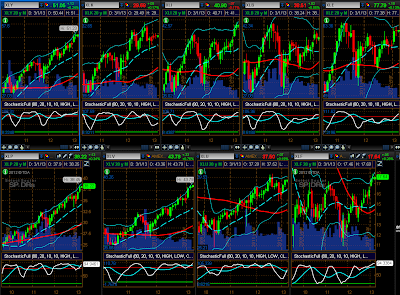 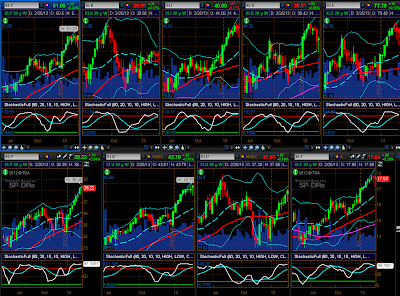 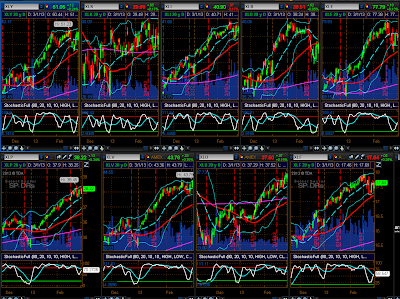 As shown on the 1-Week percentage gained/lost graph below of the Major Sectors, the largest gains made this past week were in Consumer Discretionary, followed, primarily by Health Care, Utilities, and Materials, while there were some losses in Financials.

In addition to markets trading in a 2-month long range, they have basically been positioned more defensively, which makes sense, given the fact that many of them are trading at or near all-time highs. 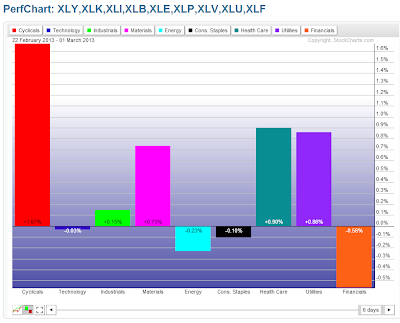 As shown on the Weekly charts below of some of the larger bank stocks and ETF, we also see that they are range-bound, with some profit-taking occurring at these levels.. I'd like to see these also break out and hold above their respective ranges on increasing and sustained volumes to support any attempted breakout on the Major Indices and Sectors. Without strong support by the Financials, I don't think any attempted rally in the Major Indices would last very long. 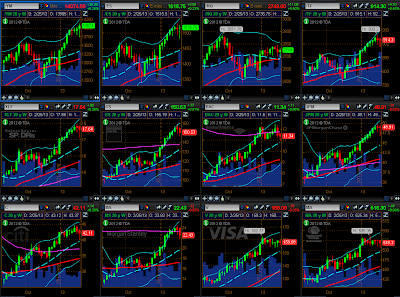 As shown on the Weekly chart below of AAPL, price is in downtrend and is sitting on the 50% Fibonacci fanline from the 2009 lows to its all-time high in September 2012. It's about 30 points above a confluence of two Fibonacci retracement levels (a larger 50% level and a smaller external 161.8% level) and major support around 400. A failure at this level could send it tumbling down to around 350, then 300. 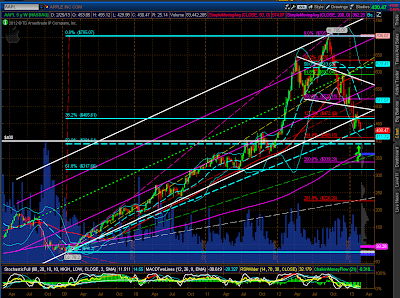 As shown on the Weekly ratio chart below of AAPL:NDX, price closed on Friday in the vicinity of a confluence of major support in the vicinity of 0.15. There is a small positive divergence on the Momentum indicator, although it's still trading well below zero. Failure to hold this level could send this ratio down to around the next major support level at 0.13.

Inasmuch as future direction in AAPL has an influence in the NDX, it's one to watch during the coming week(s). 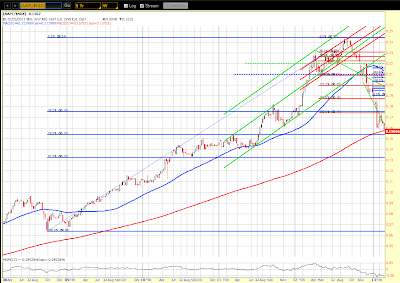 Price rallied and is flirting with major resistance, as shown on the 5-Year Weekly chart below of 30-Year Bonds. Whether it is forming a bear flag remains to be seen. A close, hold and rally above this resistance level would negate such a formation, but wouldn't guarantee that price won't breach this level once more. Despite the large volumes of the past few weeks, the drop below this resistance level has been small in comparison. 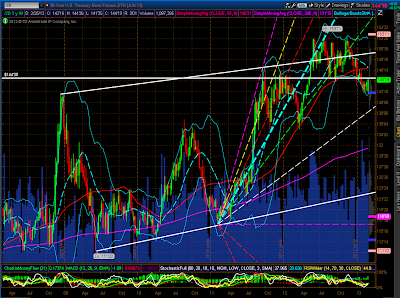 As shown on the 5-Year Weekly chart below of the U.S. $, price continued to rally this past week to close above the 82.00 major resistance level. A hold above this level could see price climb further to 82.76 and 83.45. 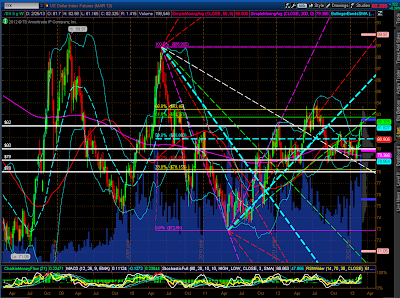 In summary, last week saw an increase in range-bound intraday volatility, as markets reacted to the results of Italy's elections, Ben Bernanke's 2-day testimony as he re-iterated Fed monetary support for some time to come (as was voted on in the last FOMC meeting on January 29/30th), and President Obama signing the "sequestration" order that starts putting into effect the $85 billion in automatic spending cuts.

We may not see a firm resolution of the range-bound trading until after Friday, although I wouldn't be surprised to see the Dow 30 make a run for its all-time high of 14198.10, before it settles to either continue upward to facilitate the S&P 500 matching its all-time high of 1576.09, or falling back to begin a pullback or correction. As I mentioned above, we'll need to see money flowing into Technology and Small-Caps to support such a bullish attempt…that's why I'll also be watching AAPL and AAPL:NDX, as well as the Financials, together with other indicators that I mentioned in my last weekly market update.

A further rally at this time is no small task, as markets are, essentially, defensive, range-bound, and overbought…we'll need to see a sustained increase in volumes to support, convincingly, such a rally for any meaningful period of time.

Have a great weekend and good luck next week!