Another Week, Another Warning

As the cyclical bull market that started in March 2009 has ground on, it seems that every week we’ve had warnings about its imminent end. On Friday, Market Watch columnist Michael Sincere weighed in with “Seven Signs We’re Near A Top”. To save you a click, here is a sample of Mr. Sincere’s analysis:

5. The stock market crash of 2008 has been forgotten. Investors forget, but the market never does. Those who do not heed the lessons of the past will once again learn a painful lesson.

The Problem With Market Meltdown Warnings

The problem with these warnings isn’t so much that they’re often wrong: at some point — perhaps soon — they will be right. The problem is that there’s an opportunity cost to having a constant bunker mentality: if you put most of your money in cash, you’ll get miserly returns on that cash while missing out on most further equity market upside; if you pour money into an inverse ETF, such as the Direxion Daily Small Cap Bear 3x (TZA), you’ll rack up losses while you wait.

Another approach is to stay invested but hedge. This can present its own challenges though:

In a recent article (“Rethinking Risk Management: A New Approach To Portfolio Construction”), I described a new, hedged portfolio approach that can obviate the problems mentioned above. Below, we’ll look at an example of how an investor could aim for modest returns over the next six months while limiting his downside risk to a a single digit drawdown in the event of a severe market correction.

Consider the case of an investor with $100,000 in cash who is tired of getting paltry money market returns, but is wary of investing in the stock market at current levels. He’s willing to accept some downside risk, but not much — the worst possible decline in the value of his account that he could tolerate is 8%. And on top of that, he’s very frugal, so he doesn’t want to pay much at all to hedge. Using Portfolio Armor‘s hedged portfolio construction tool, he’d skip the first field (“Tickers”) if he didn’t have any investment ideas in mind, and he’d enter “100000” in the next field (“Dollar Amount Of Portfolio”), and “8” in the field after that (“Threshold”, which refers to the largest decline he would be willing to risk). 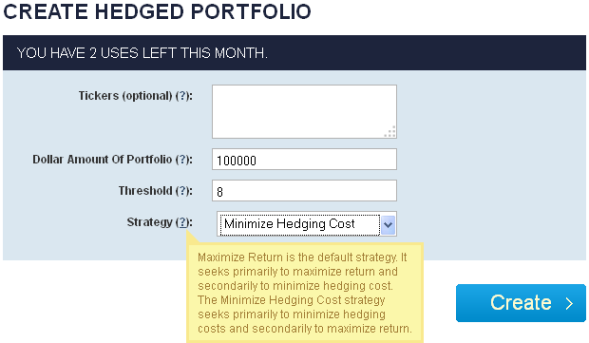 As you can see in the image above, in the fourth field, our hypothetical investor would pick the “Minimize Hedging Cost” strategy, because he is sensitive to hedging cost. This strategy seeks to primarily to minimize hedging costs, and secondarily to maximize potential return. A couple minutes after clicking the “Create” button, he would have been presented with the following hedged portfolio, as of Friday’s close (results may, of course, differ, depending on prevailing market conditions): 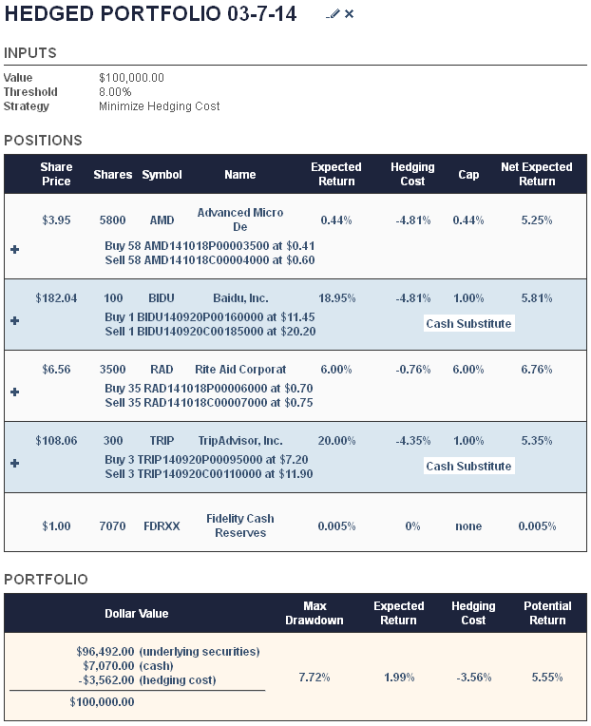 Why These Particular Securities?

At first glance, these names would seem to have little in common. But if you look at the furthest right column, “Net Expected Return” (i.e., expected return net of hedging costs), you’ll notice that the figures for these positions cluster in a fairly tight range, from 5.25% for AMD to 6.76% for RAD. What these securities have in common is that, of the thousands of hedgeable securities trading in the US, as of Friday’s close, these had the highest expected returns net of hedging costs for an investor who was only willing to risk a 8% decline, and who was seeking primarily to minimize his hedging cost.

Each Security Is Hedged

As you can see in the second image above, AMD is hedged here with an optimal collar with its upside capped at .44% (its “cap”; the closest call options that worked here were a little more than 1% out of the money) and its maximum downside limited to 8% (its “threshold”). As you can see the bottom of this image, the net cost of this collar is negative, meaning the investor would be getting paid to hedge AMD in this case[i]. That’s true of all of the hedged positions in this portfolio as well.

As you might expect, the larger a decline an investor is willing to risk, the higher the net expected returns he’ll see for individual positions in his portfolio. In this hedged portfolio example, if each of these underlying securities went to zero before their hedges expired, our investor’s portfolio wouldn’t decline more than 7.72%, so his risk is very modest. Consequently, the potential six month return of his portfolio, at 5.55%, is also modest compared to a less tightly-hedged portfolio. But compared to sitting on the sidelines in cash, this potential return is quite generous. Consider that the average money market fund is yielding less than 0.5% per year, or 0.25% every six months. 5.55% is more than 22 times as high. And in one scenario, the investor could earn that 5.55% return sooner than six months from now, freeing up his money to be reinvested in another hedged portfolio, perhaps one with a higher potential return.

Let’s consider three possible scenarios for the market in general, and for the underlying securities in this hedged portfolio in particular, over the next few months, and how each would affect our hypothetical investor’s returns:

Worthy Of Consideration For Risk-Averse Investors

The three scenarios above give an idea of the range of possible outcomes here. Better-than-cash returns are likely in a sideways-to-positive market, and the worst case scenario is a decline of 7.72%. Given the range of possible outcomes, this approach may be worthy of consideration for risk-averse investors. Less risk-averse investors might consider a hedged portfolio with a larger threshold and a higher potential return.

[i] To be conservative, the net cost of the collar was calculated using the bid price of the calls and the ask price of the puts. In practice, an investor can often sell the calls for a higher price (some price between the bid and ask) and he can often buy the puts for less than the ask price (again, at some price between the bid and ask). So, in practice, the investor would likely have gotten paid more than $1,102 to open this collar.

[ii] “Close”, because if the investor sells his underlying securities shortly before their hedges expire, to be prudent, he’d want to buy-to-close his short calls first, then sell his underlying securities, and then sell his puts. The cost of the calls, at that point, would be much less than the income he received for selling them in the first place, due to time decay, and it may or may not be offset fully by any residual income he gets from selling the puts shortly before expiration.

[iii] To be conservative, this potential return figure assumes that the investor will not be able to recoup any residual value for the put options he bought when he opened his collars. If he holds these positions for six months or until shortly before the hedges expire (whichever comes first), that assumption may be correct, as the time value of the hedges will have declined significantly. But if the investor’s positions get called away after only a few weeks or months, he may be able to recoup some of the cost of his put options by selling them. In that case, his actual return could be higher than 5.55%.

https://slopeofhope.com/2014/03/another-week-another-warning.html
Another Week, Another Warning