Shares of SanDisk (SNDK) hit a 52-week high intraday Wednesday, as the stock was added to the NASDAQ Technology Dividend Index. For those long SanDisk, here are a couple of ways to hedge it over the next several months.

As of Wednesday’s close, these were the optimal puts* to hedge 1,003 shares of SNDK against a greater-than-20% drop over the next several months with optimal puts. 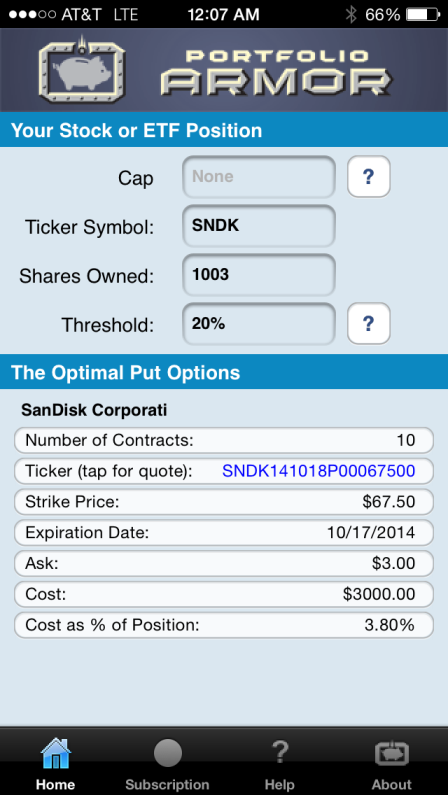 As you can see at the bottom of the screen capture above, the cost of this protection, as a percentage of position value, was 3.8%.

If you were willing to cap your potential upside at 20% between now and October 17th, this was the optimal collar** to hedge 1,003 shares of SNDK against a greater-than-20% drop over the same time frame.

As you can see at the bottom of the screen capture above, the net cost of this collar, as a percentage of position value, was 0.7%.

Optimal puts and optimal collars on securities with high expected returns can be used to build a hedged portfolio around a position, in order to maximize potential return while limiting downside. For an example of a hedged portfolio constructed around another tech stock that hit a new 52-week high this week – Microsoft (MSFT) – see this post.