In an article late last week (“Wall Street banks eye December forFed liftoff“), Reuters reported the result of its poll of primary dealers on the prospects of a Fed rate hike over the next several months:

Twelve of the 17 primary dealers, or the banks that deal with the Fed directly,polled said they expect the Fed to raise rates in December. Two pegged the date in October, and three in March 2016.

When interest rates rise, the prices of already–issued bonds fall,because new investors will demand market yields, and the only way for the current yield of an already–issued bond to rise is for the price of that bond to decline, so that its interest payments represent a larger percentage of its price. Bonds vary in their sensitivity to interest rate movements according to factors including their time to maturity. The finance term used to express interest rate sensitivity is called duration, and it is expressed as a number of years. The longer a bond’s (or bond ETF’s) duration, the more sensitive it will be to interest rate movements.

In a recent Long View column in the Financial Times (“Dress rehearsals set stage for how assets will react to rate rise“), John Authers sketched out the potential consequences of a series of rate hikes:

Higher target rates set by the Fed will send bond yieldshigher, which means bond prices must go down. With yieldsalready low, the proportionate falls in prices need to be thatmuch greater.

Among the bonds Authers argued would be most affected by rising rates were investment grade corporate bonds, particularly those of longer duration. Authers thinks Treasuries will benefit from a flight–to–quality in the event of a rate rise, and junk bonds will be less sensitive to interest rates because they carry greater credit risk.

A Bond ETF That May Be at Risk

In his column, Authers warned about longer duration bonds, but didn’t quantify what he meant by longer duration. According to Fidelity though, the average duration for fixed income ETFs is 4.43 years. An ETF that invests in high quality corporate bonds and has a higher duration than that is the iShares iBoxx $ Investment Grade Corporate Bond ETF (LQD). According to LQD’s fact sheet, the bulk of its bonds are either BBB–rated (39.52%) or A–rated (47.68%). The rest are AA–rated (10.8%) or AAA–rated (1.7%). Its effective duration is 8.04 years.

A Way for LQD Investors To Limit Their Downside

If you own LQD, agree with Authers‘ thesis, and expect a rate rise sometime in the next several months, there are a couple of ways you can limit your risk. The simplest way is to sell it. If you’d rather not keep your money in cash after selling LQD, we looked at a low–risk alternative to cash in a recent article (“An Alternative to Cash fora Risk–Averse Investor).

Another way to limit your risk if you own LQD, is to hedge it. You can hedge it by buying optimal puts to limit your downside risk. Puts (short for put options) are contracts that give you the right to sell a security for a specified price (the strike price) before a specified date (the expiration date). Optimal puts are the ones that will give you the level of protection you are looking for at the lowest cost. Below we’ll look at a way to hedge $500,000 worth of LQD (about 4,304 shares, as of Tuesday’s close) against a greater–than–15% decline over the next several months, using a hedging app.

Hedging LQD against a >15% decline by March 17th

We enter “LQD” in the Ticker Symbol field, “4304” in the Shares Owned field, and “15” in the threshold field (“threshold” refers to the maximum decline in the value of the position we are willing to risk, which, in this case is 15%). 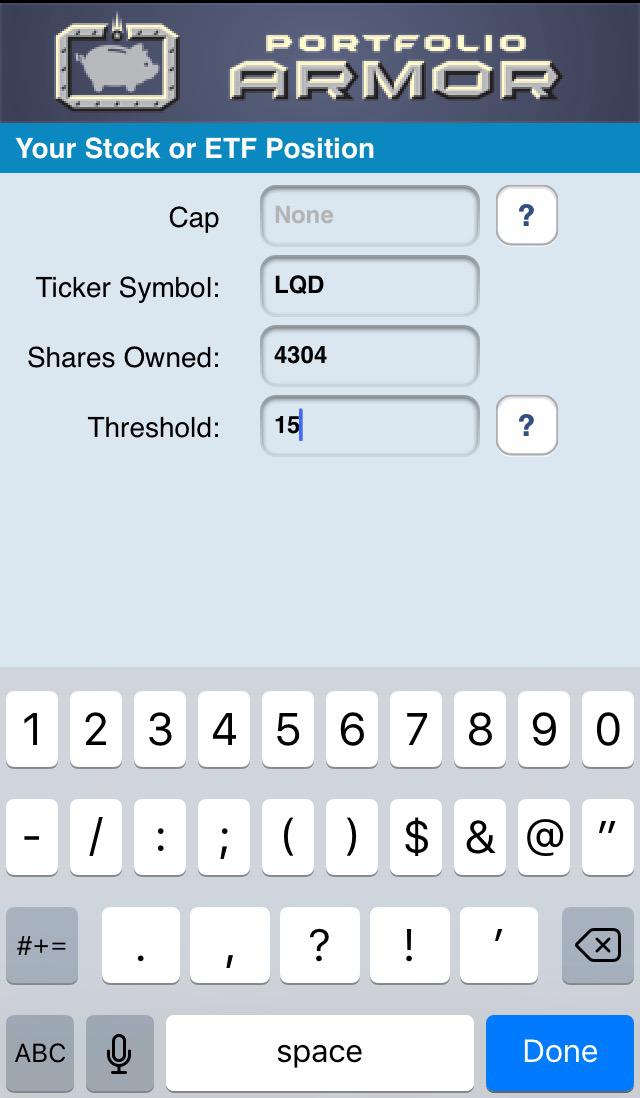 We tap “Done“, and a few moments later are presented with the optimal puts: 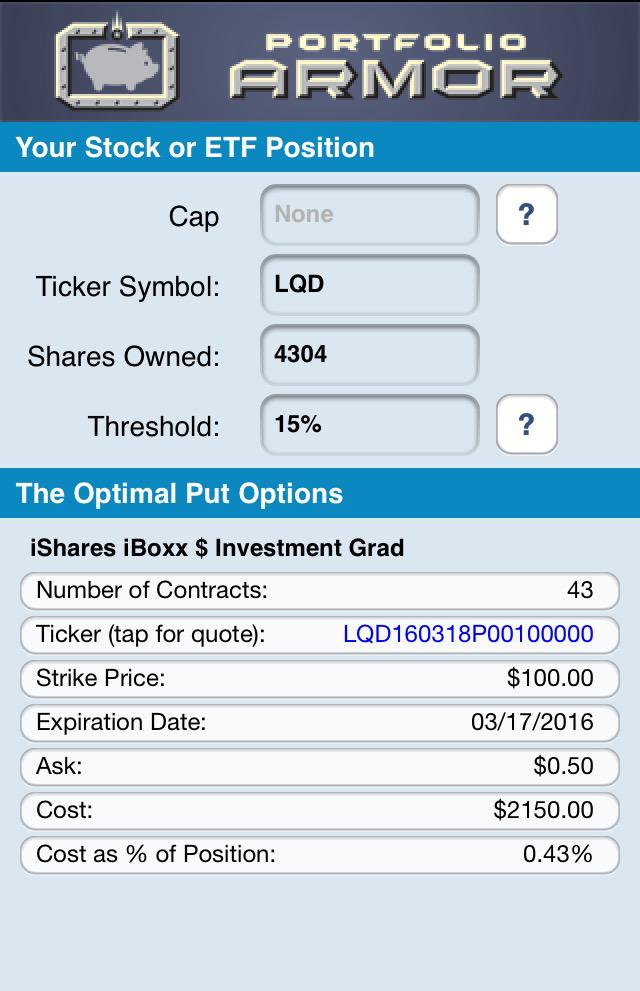 As you can see at the bottom of the screen capture above, the cost of this protection, as a percentage of position value, was 0.43%. Note that, to be conservative, this cost was calculated using the ask price of the put options. In practice, you can often purchase put options for less, at some point between the bid and the ask prices.