Just to show how content creation is always on my mind, here’s this anecdote: last night, I had a dream about meeting famed comedian Patton Oswalt at a bar (yes, normal men have dreams of meeting beautiful supermodels; me, I dream of meeting comedians). In the dream, I persuaded a reluctant Patton to take a photo with me. He was a relatively good sport about it, even though this request happened to him constantly.

The dream was so vivid, that when I woke up, I was relieved to have an easy post for the blog, since I had this really cool picture of me and Patton Oswalt. After a few moments, I realized – – whoops – – there was no meeting, and there is no picture, so……..no post. Aww, screw it, here’s a bad fake: Anyway, as I sit here at Pacific Beach, watching the surfers plow into the water, I’ll offer up a few words about the national debt. It wasn’t that terribly long ago (Reagan’s term) that crossing the  threshold into one trillion dollars of debt was a huge deal. It was a symbol of how bad things were with America. Politicians spent a lot of time talking about getting their arms around the deficit (the yearly shortfall) as well as the debt (the accumulated deficits over time). The IRS even devoted a paragraph of its 1040 instruction manual telling people where to send checks if they wanted to help pay down the debt. Sad!

Well, Bill Clinton happened to be the President at a very good time in the economy, and God knows he took full credit for it. The American public was often treated to graphics showing how Bubba was beating debt back.

I clearly remember one instance, because I watched it on the day that it happened, that Clinton announced the 1999 deficit. He took a big Sharpie and made a huge, malformed zero on the board as Gore beamed. Indeed, I think the government actually turned a profit that year, if you can believe such a thing. 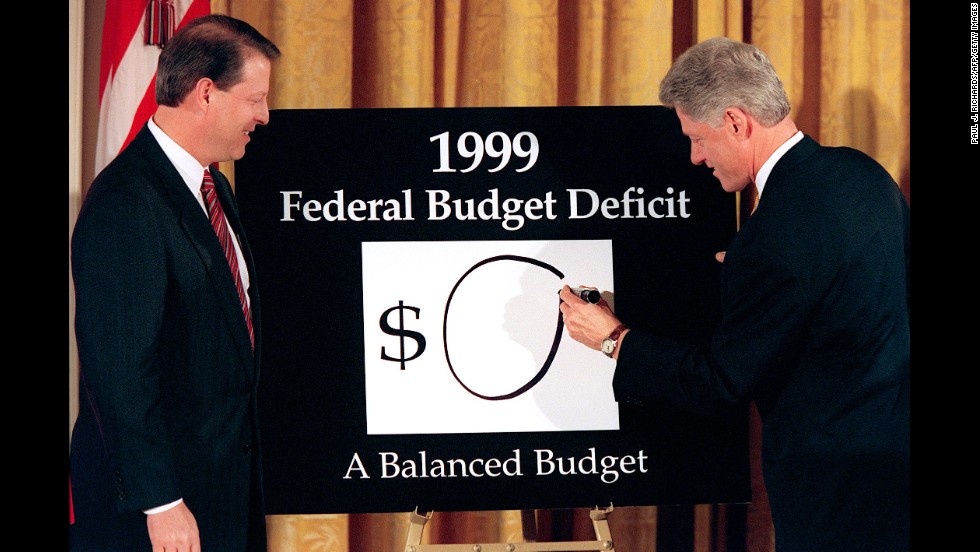 People like to assume trends will persist indefinitely (which is why our bullish friends have a VIX approaching single digits), so the coup de grace was announcing that America would have zero debt by 2013 (conveniently well after the man was out of office).

For those of you not checking the U.S. debt clock on a regular basis, I have some grim news: our debt isn’t zero. Not even close.

What is shocking to me is……….nobody cares! The markets don’t care. The citizens don’t care. The politicians don’t even talk about it anymore. Debt just seems to “work”, so they keep piling it on.

I would, in conclusion, offer one last illustration: They say that things will end badly someday. Yeah, I think that, as long as things may be stalled, “someday” will almost certainly arrive where every single cent of revenue is consumed by nothing more than sending checks to old people and making interest payments to bondholders. That’ll be……….what was that word again? Oh, yeah: bad.

Until then: party on, Garth.