The US Dollar ($USD) has dropped to a triple-bottom major support level of 92.00 and is attempting to stabilize, as shown on the following Daily chart. Fairly major resistance lies overhead at 94.00.

All three technical indicators are still in downtrend and the RSI is still below the 50 level, although the MACD and PMO have recently crossed over to the upside.

It is still trading under the bearish influence of a Death Cross moving average formation, so it’s still extremely vulnerable to a break below 92.00 and a swift drop down to its next major support level of 84.00.

Such a drop could be very threatening for equities, inasmuch as further weakness in both of these could see investors incur fairly catastrophic financial losses. As such, we may see $USD buyers step in any time now.

I’ve recently described a scenario for a potential short-term bounce in equities here, and another scenario for potential longer-term equity weakness here.

What the US Dollar does in the near-term, as described above, may influence what happens in equities…another tool that can be monitored, in this regard. 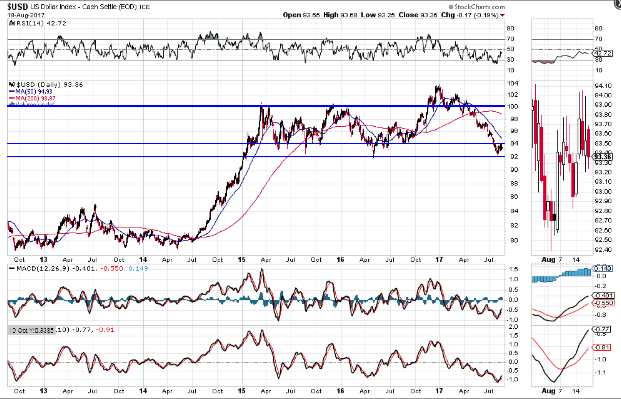