I’ve been online for over a third of a century, starting with a 300 baud modem and a BBS. During the latter portion of that timespan, the age of the Internet, I’ve been exposed to countless thousands of ads, increasingly customized to my habits, purchases, search engine requests, and whatever else can be ascertained about me by my online activity.

Starting a couple of years ago, I started noticing something odd about the web sites I visited. And here she is: A woman. A black woman………or mixed race of some kind…..and on the younger side. I probably didn’t notice her the first dozen times, or even the first few dozen. But over time, particularly on financial sites, I began to notice similar models on Bank of America…. ……or locally at the Stanford Credit Union……. ……although sometimes at least, males would be displayed, such as on CitiBank…… After seeing this going on for years, it’s pretty obvious that there is some serious pandering going on. But if the Internet is so finely-attuned to appeal to precisely whoever is doing the viewing, how come 100% – – one hundred percent – – of the financial sites I use show young black females or, on occasion, younger black boys.

OK, now a few of you are thinking, “ewww, Tim, racist!”, to which my reply is: No, I don’t think so. I grew up in the deep south and was raised in part by a black woman. I invited friends to my house as a kid, and it didn’t even occur to me there would be an issue with race until one of them asked me one day, “Will your parents mind?” to which I asked, “Why?” The answer: “Because I’m black!” Plus I’m part of a mixed-race family. So I don’t want to hear your accusations just because I’m puzzling over this peculiar phenomenon. We still have free speech.

So back to the topic at hand: this all just strikes me as odd. If all the websites above instead featured, say,  white women in their 70s, I’d have the same question. Or teenage boys. Or hispanics in wheelchairs. Or Amish teenagers. Or ANY specific kind of human being that is used across the board, 100% of the time, no questions asked. Last time I checked, I wasn’t an attractive young black woman, so I’m not sure why these sites seem to be providing me this image everywhere I turn.

My major from college was in business, so I understand targeted ethnic marketing……

There is no shortage of studies showing that the banking industry is a bastion of the white male, but for some reason, this guilty conscience has addressed itself by way of lots and lots and lots of non-white, non-male models in their ads. So while they’re not really creating a lot of diversity at the highest levels of Goldman Sachs or JP Morgan, they sure are making a difference on the web pages we all use. And there is likewise a mountain of information for marketers to make the most of these different market segments (positing, among other pearls of wisdom, that black people are not dark-skinned white people).

I even noticed this diversity-in-media-but-not-in-real-life when I was re-watching The Big Short earlier this week. The executive to whom Steve Carell’s character reports is…….drum roll…… Feel guilty yet? No? Well, give yourself some more time.

I’ll just close this pointless little musing with a full-page color advertisement from, of all things, the NSA. I think it’s supposed to be cute in a “plot twist” kind of way. 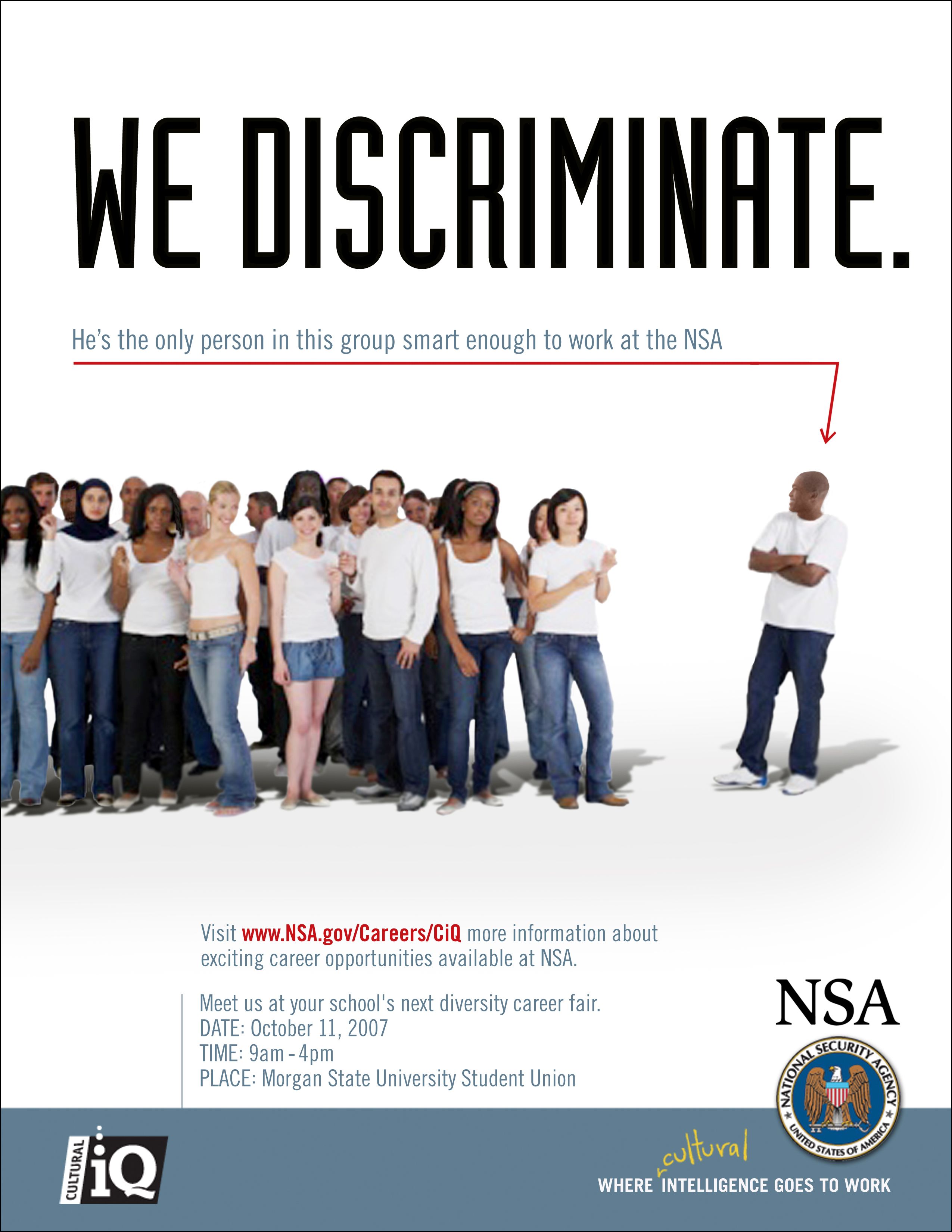 In our modern society, I am the most repulsive thing imaginable – – – a Christian white male cisgender heterosexual. But if you see me walking down the street, please don’t turn away. I’m just a dumb guy who likes to draw charts. Honest.