You can usually tell how I’m feeling just by knowing what I have playing in the background in my home office. If I’m feeling excited and engaged about the markets, I’ll put on something like Saving Private Ryan. On the other hand, if I’m feeling dejected and depressed (98% of my life), I’ll play the 1966 documentary Salesman or the 1994 documentary Crumb.

I’ve mentioned Crumb many times here on Slope, since it is such a persistent favorite of mine (you can watch it for free by clicking here……..you’re welcome). I watched it again today (yep, depressed), and I took note, as I always do, of Jessie Crumb, Robert Crumb’s talented and artistic son from an earlier marriage. He always impressed me as handsome, articulate, and incredibly well-adjusted considering what a messed-up father he had.

After the documentary was over, I was curious what Jessie was doing these days. It had been a quarter-century since they film was made, and I was wondering if he had made a successful artistic career for himself. I was dumbstruck to find this instead: 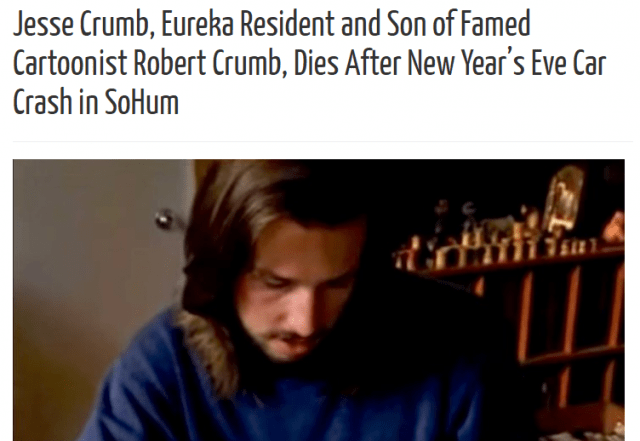 He died earlier this year. “At about 5:18 that evening, Crumb’s 1998 Toyota Tacoma crossed over the center line of Hwy. 101 and collided with a 2003 Ford F350 headed in the other direction, as Kym Kemp reported last week. He was flown to Mercy Medical Center in Redding, where he died three days later, according to a brief obituary posted online.”

This just made me so sad to see. I grouse and complain in my own life (to myself, virtually nonstop), and my own attempts at gratitude have been feeble and short-lived…………but I’m trying. Reading about surprises like this just reminds me once more – – – it can all be gone in the blink of an eye. We each get a day at a time, and one of those days, you will not witness its end.